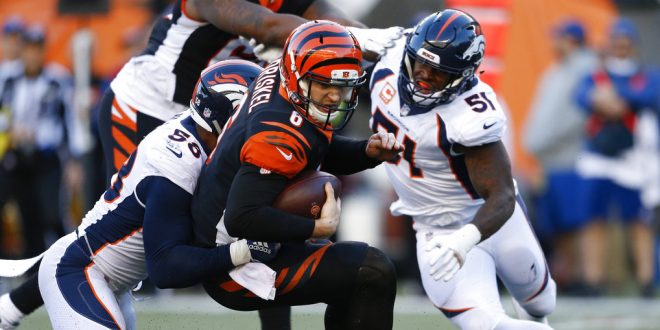 Cincinnati Bengals quarterback Jeff Driskel (6) is sacked by Denver Broncos outside linebacker Von Miller (58) in the second half of an NFL football game, Sunday, Dec. 2, 2018, in Cincinnati. (AP Photo/Gary Landers)

Following the injury to starting quarterback Andy Dalton, rookie Jeff Driskel was given the nod to make his first NFL start. He had a solid college career, playing for the Florida Gators and the Louisiana Tech Bulldogs. In his sophomore year, he finished the season with an 11-2 record for the Gators, throwing 12 touchdowns.

After an injury, he was benched and then transferred the next year to LA Tech. Driskel blossomed at LA Tech in 2015 throwing for over 4,000 yards and netting 27 touchdowns in his only season there.  He was drafted in the sixth round in the 2016 draft and finally got his first start on Sunday.

Driskel started off the game strong, completing all but one pass before having to punt because of penalties. Following a Denver touchdown, Driskel marched the Bengals down the field for a field goal.

Driskel completed his longest play of the first half, a 22-yard pass to wide receiver Tyler Boyd, on that drive. The first half came to a close at a 7-3 score.

On the next possession, he meticulously marched the Bengals down the field and capped it with a 30-yard touchdown pass to wide receiver Cody Core. That score would be the last of the day, as the Bengals were unable to muster any other offense.

With a little more than three minutes left in the game, Driskel was sacked and fumbled the ball, which sealed the win for the Broncos.

Driskel ended the day with 238 yards, one touchdown, and one interception. He also rushed three times for three yards.

Driskel had a fairly solid rookie performance based on the circumstances. The Bengals have the worst defense in the league, so  Driskel knew he would have to score several times to win. With all of that pressure, multiple mistakes are common amongst rookies.

Driskel held his own and only threw the one interception. The fumble at the end of the game was the back-breaker, but still only his first.

He was 25 for 38 in the passing game and averaged around 6 yards per pass. Driskel believes he needs to improve and didn’t do as well as he should have.

Driskel will look to continue to improve against the L.A. Chargers next week.