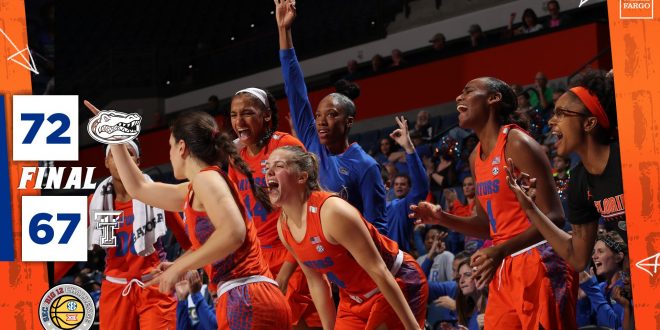 The Gators Women’s Basketball team grabbed their first win of the season this weekend defeating the Texas Tech Red Raiders, 72-67.

This weekend the Gators Women’s Basketball team came into this SEC-Big 12 matchup on a nine-game losing streak dating back to last season.

The Gators are coming off a tough loss to Northeastern losing 79- 66 last Wednesday.

The Gators were able to maintain their composure in the first half of the game, battling back and forth with the Red Raiders.

The Gators had four lead changes and five ties. Florida’s bench outscored the Texas Tech bench with 15 points. Ariel Johnson came off the bench for the Gators and hit two back-to-back three-pointers.

For Texas Tech, Chrislyn Carr dropped 11 points in the first half. She was a big part of why the Red Raiders stayed in the game throughout the half and continued to give her team momentum in key moments.

Delicia Washington, who is a big part of the Gators explosive offense, did not put up her usual numbers going only 1 for 8 from the field. However, she played her part by being a defensive force and coming up with 10 rebounds.

The second half was a test for the Gators and they passed it. After a slow start in the first half, the Gators picked it up in the third quarter. Florida scored 23 points compared to only scoring 24 in the entire first half.

Texas Tech came into this game 5-1 and left 5-2 after being tested by the Gators on their first road game of the season.

The Red Raiders had three players in double digits today, including Brittany Brewer who scored 28 points and grabbed 13 rebounds. She led the team in points for the season and landed her fifth double-double after yesterdays performance.

The Gators will be back at the O’Connell Center to host Bethune-Cookman. Tip-off is set for 7 p.m. on Wednesday, December 5th.