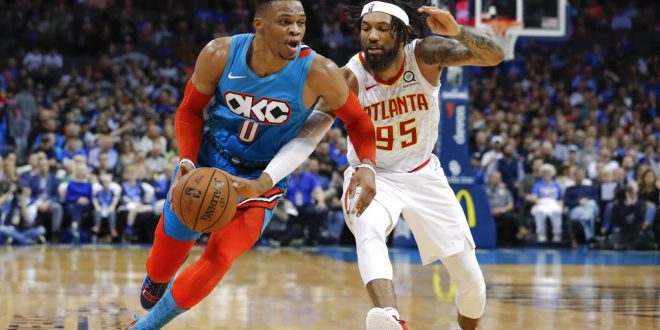 Thunder Are On The Right Ship After a Slow Start

After starting off the season 0-4, The Oklahoma City Thunder are back on track after beating the Detroit Pistons last night 110-83. The Thunder have won five of their last six including defeating defending champions the Golden State Warriors.

Former University of Florida  Men’s Basketball coach Billy Donovan and former MVP Russel Westbrook have really turned this Thunder team around. As a team so far they have an impressive field field goal average of 45% and have put up more than 100 points in their last 10 games. Not to mention their defense has been at the top of their game causing four of their last six opponents to put up under 100 points.

When facing the Pistons you are also facing off against all-star center Andre Drummond who currently leads the league in rebounds. Drummond entered the game averaging 16 rebounds per game, but the Thunder held him to just 13 points and six rebounds as his 12-game streak of recording at least 10 total rebounds was snapped.

“That was just team defense and we executed the game plan very well,” Westbrook said. “Guys did a good job of helping on the block and helping on the box out. I think Drummond had five or six rebounds and he leads the league in rebounds so we did our job.”

The Thunder also did a great job attacking the paint as Center Steven Adams lead the Thunder with 21 points and six rebounds, followed by all-star foward Paul George putting up 17 points and Westbrook putting up 18 with six assists.

Billy Donovan: “I thought we played with really good intention and focus throughout the course of the game.” pic.twitter.com/aePQLlGmBW

The Thunder look to end their three game road trip the same way they started it last night. Up next they face up against a struggling 8-17 Brooklyn Nets team followed an even worse 5-19 Chicago Bulls team.  As of now the Thunder have been suffering on their outside shooting, but if Paul George can find his grove back from behind the three point line, stick with the defense their playing now, and Westbrook keeps on creating the opportunities he has been creating we can see the Thunder team compete for a top two spot in the Western Conference.