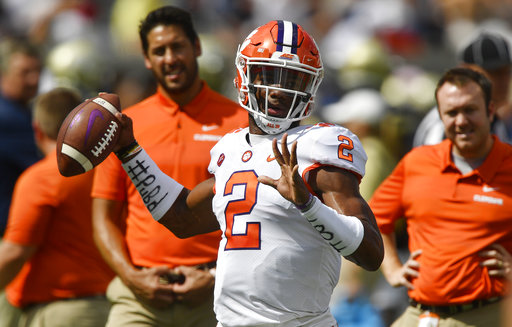 Clemson quarterback Kelly Bryant (2) warms up before the first half of an NCAA college football game between Georgia Tech and Clemson, Saturday, Sept. 22, 2018, in Atlanta. (AP Photo/Mike Stewart)

The former starting quarterback for the Clemson Tigers, Kelly Bryant, has announced that he is transferring to the University of Missouri.

After compiling a 16-2 record and a playoff appearance as Clemson’s QB, Kelly Bryant entered a battle for the starting job with freshman Trevor Lawrence. Bryant saw his role decline in each of the first four games of this season before Lawrence was named the starter.

After that decision, Bryant decided to leave the team in order to preserve his eligibility for next season. He announced his intent to transfer and started visiting schools. Among those with interest were Auburn, Mississipi State, North Carolina, and Arkansas. He announced his decision to go to Missouri on Tuesday afternoon.

For Missouri, they are preparing for life without Drew Lock. Lock has been the starting quarterback since the fifth game of his freshman year. Lock has improved every year so far, and the Tigers are 15-10 over the last two seasons, including a solid 8-4 regular season this year.

It’s clear that Kelly Bryant wants the opportunity to start. Mizzou will very likely give him that. In Bryant, the Tigers are getting a proven quality starter. He can be a strong veteran presence for the team and a very exciting addition to their program.

Former #Clemson QB Kelly Bryant (@KellyB125) announces via twitter today he will transfer to Missouri for his final year of eligibility.

Bryant 16-2 as a starter for the other Tigers and was named #ACCFCG MVP a year ago. #MIZ #MIZZOU pic.twitter.com/oxfteXbVad