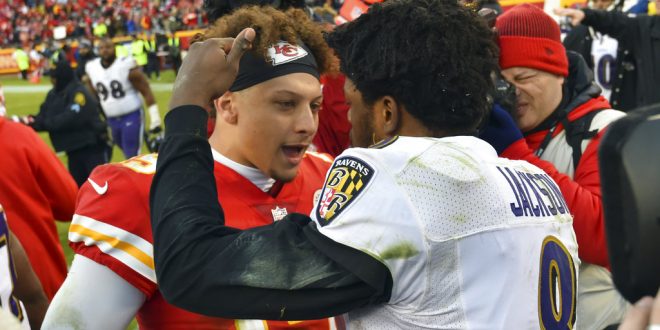 It was one of those “any given Sunday’s” in the AFC and throughout the NFL this week.

Miami shocked New England behind the Miami Miracle. Baltimore had the upset in Kansas City until Patrick Mahomes ripped it away from them. Pittsburgh fell in Oakland. Indianapolis ended Houston’s hot streak, and Denver had it’s hopes ended by none other than San Francisco.

Here’s an updated look at the playoff picture:

The Chiefs are out in front in the AFC as they have been for the whole year. They’re one of only three teams at 11-2, along with the Rams and Saints.

That standing seemed in jeopardy for a large part of Sunday, as they struggled with Baltimore’s elite defense.

Mahomes showed why he’s an MVP favorite though, leading his team down the field late in the fourth quarter to tie the game at 24 and send it to overtime. Even without Kareem Hunt, the Chiefs still have an offense to be reckoned with because of Mahomes, Tyreek Hill and Travis Kelce. Mahomes has 43 touchdown passes through 13 games, while no other quarterback is even at 40.

Essentially, the only thing that stands between them and home-field advantage is their next game. They host the 10-3 Chargers at home in a crucial Thursday night showdown at Arrowhead. A win for Kansas City puts home field in their fingertips. A win for Los Angeles though would give them the AFC West lead and somewhat shockingly send the Chiefs to a wild card spot.

The Miami Miracle hurt the Patriots in more ways than one.

Obviously, losing on a play like Kenyan Drake’s hook-and-ladder, 69-yard score hurts, especially after being agonizingly close to a win in a city that’s been a house of horrors for the Patriots as Miami has been.

But even bigger than that, it significantly hurt their chances at home-field advantage. Though they own the tiebreaker against Kansas City because of New England’s head-to-head 43-40 win in October, they sit two games behind Andy Reid’s team with three games left to play. Even if the Chiefs lose to the Chargers, the Patriots would still then be at least a game behind Los Angeles.

The Patriots are still in good shape for a first-round bye though, with home games against the Jets and Bills left. They also own the tiebreaker against the Texans, who are also 9-4, because of New England’s opening week win in Foxborough.

Their big test comes this Sunday in Pittsburgh. The Steelers are reeling, and need a big win to keep Baltimore in the wild card spot. Brady owns Pittsburgh though, with a career 10-2 record against them. The Patriots will also be looking to come back from a loss, and know they need to win this matchup too. A win would clinch yet another AFC East title for Brady and Belichick.

Hosting a divisional round game is New England’s goal at this point. The Patriots haven’t won a road playoff game since 2006, so making sure they stay in Foxborough is key.

Well, the Texans had to eventually lose at some point.

After slugging out to an 0-3 start, Deshaun Watson and co. rattled off nine straight wins to put themselves firmly in the playoff hunt and atop the AFC South.

However, they came back down to Earth this past weekend. They fell at home to division rival Indianapolis 24-21 in a game that the Colts led a majority of the way.

The Texans’ defense got torched by Andrew Luck to the tune of 399 yards. That exposed a Houston secondary which will need to shore up due to the types of quarterbacks it could face in the playoffs (Luck, Mahomes, Brady, Roethlisberger, Rivers).

Houston should be able to bounce back though. They play three teams with losing records to close the season (Jets, Eagles, Jaguars). They still hold a two game lead in the division, meaning that if they win two out of the next three, Bill O’Brien’s team will capture the AFC South crown.

The good news for Pittsburgh: they still lead the AFC North.

The bad news for Pittsburgh: that lead’s gotten smaller over the last month.

The Steelers have been in a rough patch over the last few weeks. They barely squeezed out a win in Jacksonville 20-16 four weeks ago, and have since proceeded to drop their last three games, all by one score. Big Ben threw a goal-line pick to seal a 24-17 loss at Denver. Then, they choked a 23-7 lead at home to the Chargers in a 33-30 collapse.

And now this past weekend, they passed up a chance to extend their lead atop the division after Baltimore lost to Kansas City. Pittsburgh lost at Oakland, the team with the worst record in the AFC, 24-21.

James Conner went down in the Chargers’ game and missed the loss at Oakland. A possible return against New England would be a big boost for an offense that’s been depending alot on Antonio Brown and Juju Smith-Schuster the past few weeks. Defensively, they’ll need to show up against Brady and co. too, as they’ve given up 621 pass yards in the last two weeks.

Not to mention, their lead atop the division is down to just 0.5 game.

If any team has shown that it’s possible to be an under-the-radar 10-3 team, it’s the Chargers.

Phillip Rivers has had a revitalized year with offensive weapons all around him in Melvin Gordon, Keenan Allen, Tyrell Williams, and Mike Williams.

They won’t be under the radar much longer though, as they have three of their toughest games left in consecutive weeks.

As mentioned before, they have a showdown with the Chiefs in Kansas City this Thursday night. A win, and the Chargers will go from overlooked to leading the AFC’s hunt for home-field. A win also clinches a playoff spot, whether it’s through winning the division or a wild card spot.

From there though, they still have to host the Ravens top-notch defense, and then take a trip to a Denver team that already beat them when they met in LA earlier in the season.

These next few weeks can go a long way in showing if the Chargers are true contenders.

The Ravens were this close to being the first team all season to knock off the Chiefs in Kansas City. The bothered Mahomes and the high flying Chiefs offense all game long, getting pressure and playing stingy against the run. They held them to 17 points through 58 minutes, before eventually succumbing to Mahomes’ magic.

Baltimore has to be feeling good though. Their offense has an added dimension with Lamar Jackson running the show, and head coach John Harbaugh said he should be good to go this week after exiting the loss to the Chiefs.

They have that game left in Los Angeles against the Chargers, but other than that take on the Buccaneers and the Browns. They own the tiebreakers with the other three 7-6 teams, so in effect, they still ‘control their own destiny’.

Denver is mathematically still in it, but with four teams above them with three games left to go, their going to need alot of bounces to go their way.

Indianapolis, Miami, and Tennessee are all coming off big wins for their playoff hopes.

The Colts earned a big win in Houston and Andrew Luck seems to be back the Luck we knew before his injury woes. Miami continued their success against New England in South Florida thanks to the Miami Miracle. And in Nashville, the Titans stomped on the Jaguars thanks to Derrick Henry’s 238 rush yards and four touchdowns.

The Colts still have big games left against the Cowboys and Titans, while Miami still has a trip to Minnesota looming this week. Depending on how things shake out with the Ravens, that Week 17 matchup between Indianapolis and Tennessee might be crucial in determining that last Wild Card spot.