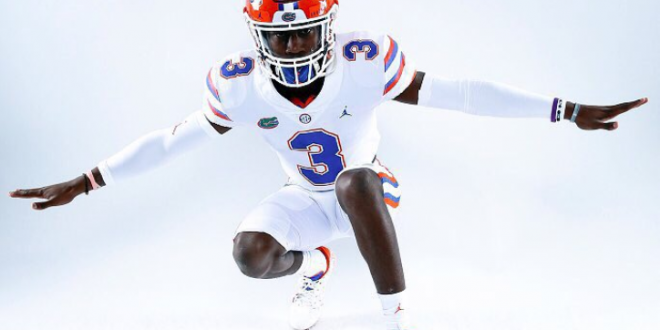 The Florida Gators had six guys on campus for the last official visit weekend before early signing day on Wednesday (December 19th). The only Gator verbal commits taking OV’s were Dionte Marks and Chester Kimbrough. Trey Sanders, Deyavie Hammond, and Siaki Ika were uncommitted visitors. And Cordale Flott was the only recruit verbally committed somewhere else (LSU).

One of the bigger names on campus this past weekend was Trey Sanders, who’s a RB from Bradenton, FL. Sanders is a 5 star and the Gators currently have no five stars verbally committed for the 2019 class. He holds offers from Alabama, Georgia, and FSU, just to name a few.

Gators commit Chester Kimbrough conveyed that he really enjoyed his visit. He said, “The highlight of my visit was to see the players’ and coaches’ faces again and really just communicating with them all.”

In addition, Kimbrough also said his mom enjoyed the visit and that she loves the University of Florida.

The coaching staff told Kimbrough that he needs, “…to come in and be a factor immediately to help the team win.”

Siaki Ika expressed that he had a great time and that it, “…was fun to experience all of this with my family.” Ika also said the best part of his visit was, “…hanging out with the players and getting their whole spill on how things are.”

Ika, who will be signing on Wednesday, also talked about the coaches message to him; “Coaches focused mostly on how much not only the program but the whole community shows love to you.”

On Sunday, the Gators picked up a 2020 commit Rashad Torrence II, who is a 4 star safety from Marietta, Ga. In Torrence’s Twitter bio, he proclaims that he has a 3.92 GPA, which means its safe to say the strong academics at UF was probably a huge reason for his verbal commitment.

Aside from Torrence, there were four other unofficial visitors on campus; Diwun Black, Joshua Braun, Jalen Rivers, and Chantz Williams.