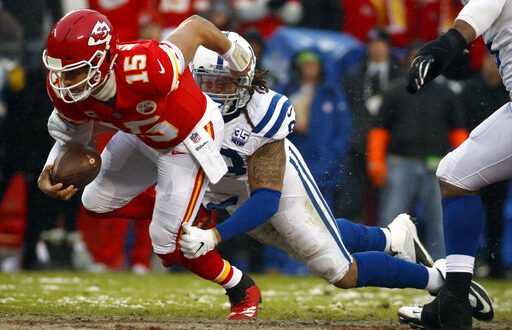 Kansas City Chiefs quarterback Patrick Mahomes (15) is tackled by Indianapolis Colts defensive end Margus Hunt (92) as he runs for a first down during the first half of an NFL divisional football playoff game in Kansas City, Mo., Saturday, Jan. 12, 2019. (AP Photo/Charlie Riedel)

Chiefs Push Past Colts to Advance to AFC Championship

The Kansas City Chiefs rolled past the Indianapolis Colts this weekend, winning 31-13 to advance to the AFC Championship.

Patrick Mahomes looked anything but nervous in his playoff debut. After a spectacular first regular season with the Chiefs, Mahomes continued to shine in Saturday’s game. Though it was not his best performance of the season, he still led his team to a strong performance. Check out some of his stats from his first playoff appearance below:

Where Did the Colts Go Wrong?

Indianapolis got off to a slow start, going 3-and-out on their very first drive. Unfortunately for Colts fans, the momentum never seemed to swing their way. Andrew Luck put together a stellar regular season, but couldn’t seem to find any rhythm on Saturday. Luck completed just over half of his passes, throwing for just one touchdown and taking three sacks. He earned a QBR rating of just 23.3, in comparison to Mahomes 63.1.

The Colts scored just once in the first half, getting a touchdown toward the end of the second quarter. They would only see the end zone one more time in the game, scoring a touchdown in the final minutes of the game.

As for the defense, to say they struggled could be an understatement; they gave up three touchdowns and a field goal to the Chiefs in just the first half of the game.

With Saturday’s win, the Chiefs have secured a spot in the AFC Championship. They will go up against the New England Patriots, who beat the Los Angeles Chargers on Sunday. Tom Brady and Patrick Mahomes will face off this weekend, as Kansas City hosts the Patriots this Sunday at 6:40 p.m.

Born and raised at the ballpark! Typically quiet- until it comes to sports. I'm a South Florida native with a passion for baseball nearly as strong as my faith. Grew up in garnet + gold, turned out sporting orange + blue. Likely to be found with a camera. And yes, I take food pictures.
@victoriarossman
Previous Rhonda Faehn: Hire to Fire
Next Razorbacks, Vols Prepare for SEC Matchup