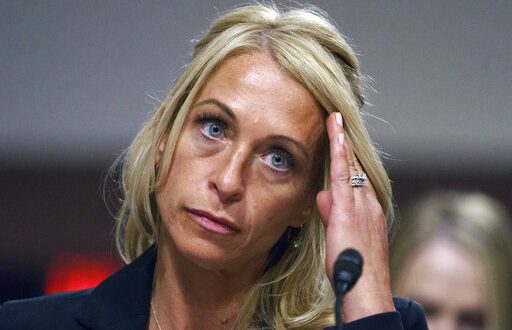 FILE - In this June 5, 2018, file photo, former USA Gymnastics executive Rhonda Faehn pauses as she testifies during a Senate Subcommittee on Consumer Protection, Product Safety, Insurance, and Data Security hearing in Washington. The University of Michigan ended its relationship with Faehn on Sunday, Jan. 13, 2019, three days after she agreed to work as a coaching consultant for the women’s team. (AP Photo/Carolyn Kaster, File)

In less than a week, former Women’s Program Director for USA Gymnastics, Rhonda Faehn, was both hired and fired by the University of Michigan.

Faehn was hired as a consultant in a coaching capacity with the women’s gymnastics team. Faehn was a former coach at the University of Florida leading the team to a 347-86-6 record over her 13 seasons as head coach. After the 2015 season, Faehn was hired as the Senior Vice President of USA Gymnastics.

Faehn was working with USA Gymnastics in the midst of the Larry Nassar’s sexual abuse of multiple gymnasts.

Just days after hiring her, the University of Michigan announced it was severing ties with a former USA Gymnastics executive connected to the Larry Nassar sexual abuse scandal https://t.co/hHu7qlQ9aj

The University of Michigan hired Faehn after finalizing her agreement on Thursday, Jan. 10, according to multiple reports. Faehn’s hire by the Wolverines was announced on Saturday.

Athletic Director of the University of Michigan said in multiple reports in a news release that the school had felt comfortable with the hire after regarding Faehn’s cooperation in the Larry Nassar case.

Since then, there have been multiple reports of negative statements by University of Michigan’s Board of Regents after the hire. The negative backlash after this hire reportedly contributed to the end of the consulting ties with Faehn.

There were no charges to Rhonda Faehn during her time with USA Gymnastics. However, sexual abuse victim and Olympic silver medalist, Aly Raisman, did question Faehn’s handling of the Nassar situation.

According to the Indy Star, Faehn was told about the concerns of Nassar on June 17, 2015. A month later, Raisman said she told Faehn of Nassar’s abuse. However, Faehn along with other USA Gymnastics officials reportedly waited another week to report Nassar to FBI, according to the IndyStar.

According to a statement on University of Michigan’s website released on Sunday night, Wade Manuel, the university’s Donald R. Shepherd Director of Athletics said:

“I have come to the conclusion that it is not in the best interest of the University of Michigan and our athletic program to continue the consulting contract with Rhonda Faehn. It was the wrong decision, and I apologize. Our student-athletes are our highest priority and I want to do everything in my power to support them fully and put the focus back on their athletic performance.”

On Sunday morning, Faehn tweeted this:

Faehn led the Florida Gator gymnastics team to multiple titles in her time as head coach.

During the 2003 and 2004 season, the Gators placed second in the NCAA regional. The following four years, Florida clinched four consecutive NCAA regional tournaments.

Florida was a consistent powerhouse with Faehn as head coach. Faehn eventually led the Gators to their first-ever national championship in gymnastics in 2013.

Florida continued to dominate grabbing the NCAA title in 2014 after the team tied the Oklahoma Sooners in the NCAA Super Six Finals. The following year, Florida won their third consecutive title in 2015. 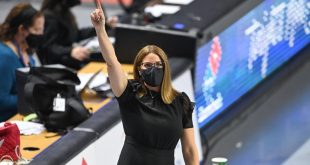 Bri Edwards and Her Journey with the Gators

Bri Edwards is a national champion gymnast from Gulf Coast with a 4.7 GPA who …