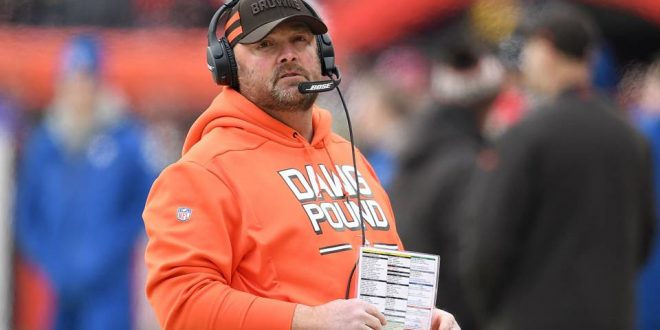 Kitchens has now been coaching at the collegiate and professional level for 20 years. Let’s take a look at his journey:

With his experience in numerous collegiate and professional organizations, Kitchens has had multiple high profile mentors. The list includes Nick Saban, Bill Parcells, Ken Whisenhunt and Bruce Arians. All four have been viewed as offensive masterminds, so Kitchens should be well equipped for the job.

A Baker in the Kitchen

The Browns are hoping that Kitchens can continue to develop soon-to-be second year quarterback Baker Mayfield. Mayfield had a very promising rookie season, throwing for 3,725 yards, 27 touchdowns and 14 interceptions.

The Oklahoma product showed his true potential after Jackson’s firing at the conclusion of week eight. He threw for 2,254 yards (282 yards per game) and 19 touchdowns, leading the Browns to a 5-3 record.

Kitchens is thrilled about the culture and direction of the organization.

“We’ve got the best support staff I’ve ever seen anywhere I’ve been. When you have a desire to win, and everybody’s willing to check their ego at the door to get it done, then you should be successful, and we’re going to be successful.”

Furthermore, Kitchens has a ton of weapons to work with on both sides of the ball. This includes running back Nick Chubb, wide receiver Jarvis Landry, tight end David Njoku, defensive end Myles Garrett, defensive back Denzel Ward and safety Jabrill Peppers.

After 16 years without a playoff berth, the Browns finally seem to be headed in the right direction.

Previous LSU Tigers Take a trip to 18th ranked Ole Miss Rebels For SEC Match up
Next Gators Drop to 1-3 In SEC Play After Loss to No. 24 Mississippi State