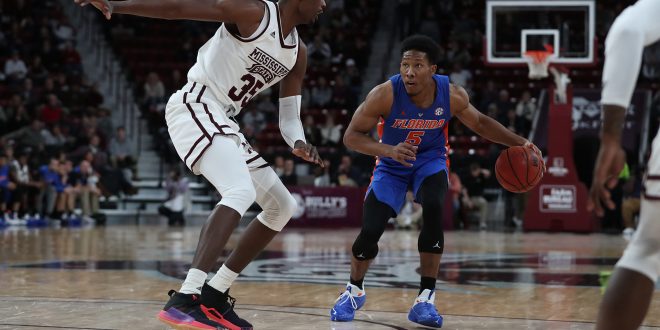 Gators Drop to 1-3 In SEC Play After Loss to No. 24 Mississippi State

SEC play has not been kind to the Florida Gators so far.

For the 2nd time in conference play, the Gators gave up a go-ahead basket in the final seconds of the game. This time it was Quinndary Weatherspoon who drove the length of the court before making a lay-up over Kevarrius Hayes to give No. 24 Mississippi State a 71-68 win. Hayes fouled Weatherspoon on the play and made the free throw with four seconds remaining. KeVaughn Allen pushed the ball down the court before throwing up a three that left his hand after time expired.

Florida was trying to avoid losing their 3rd SEC match-up in their fourth game for the first time since the 1996-1997 season.

The Gators hung tough throughout the night as the game was back and forth. The game consisted of 12 ties and 11 lead changes. KeVaughn Allen did his best to pull off the road upset as he scored 17 points on 5-for-12 shooting.

The freshmen duo of Andrew Nembhard and Noah Locke was solid once again as they were second and third on the team in scoring. Nembhard scored 13 points and dished out eight assists. Locke was 1-for-4 from three point land but still managed to score 12 points. Jalen Hudson had another tough night, only scoring three points on 1-for-8 shooting.

Whenever Mississippi State went on a dry spell, Lamar Peters was there to answer the call.

The guard out of New Orleans was deadly from three as he scored 16 points on 4-for-8 three point shooting. He also made sure to get his teammates involved, finishing with six assists. Unlike the Gators, the Bulldogs did a good job of taking the right shots. Even though they made the same amount of three pointers as Florida (10), they were more efficient as they had 17 attempts compared to the Gators 31.

Mississippi States’ bench also made a big difference as they managed to outscore the Florida bench 30-18.

The Gators will be back on the road as they will be traveling to Athens, Georgia to play the Georgia Bulldogs. UGA is coming off a tough 20 point loss to Kentucky on Tuesday night.

The basketball version of the Florida-Georgia rivalry tips off at noon on Saturday. The game can be seen on CBS and a radio broadcast can be heard on ESPN Gainesville 98.1 FM & 850 AM WRUF.