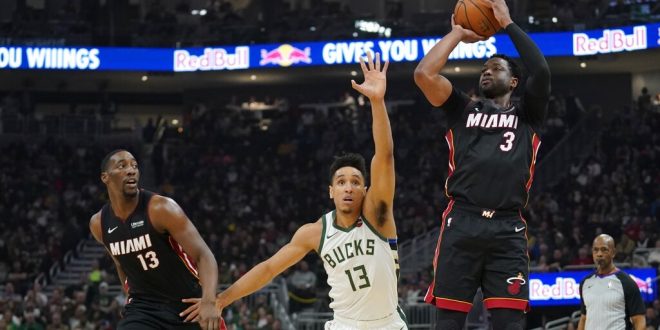 Miami Heat's Dwyane Wade shoots during the first half of an NBA basketball game against the Milwaukee Bucks Tuesday, Jan. 15, 2019, in Milwaukee. (AP Photo/Morry Gash)

Miami Heat Suffer Worst Loss of the Season to Bucks

The Miami Heat were going into Milwaukee finally over the .500 mark at 21-20.

That didn’t last very long as the Bucks blew out the Heat by nearly 40 points with a 124- 86 victory. 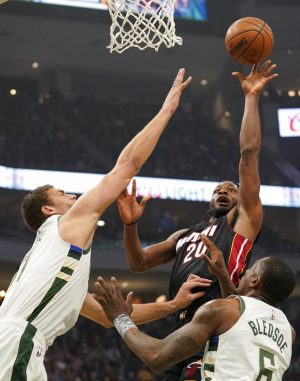 (AP Photo/Morry Gash)Giannis Antetokounmpo recorded his fourth triple double of the season with 12 points, 10 rebounds and 10 assists. Hassan Whiteside led the way for Miami with 19 points and 8 rebounds.

The Heat didn’t have much going offensively as Whiteside and Justise Winslow were the only players to reach double digit points. The other three starters for Miami combined to score 10 points while power forward James Johnson was held scoreless.

Winslow manned the point guard duties once again for the Heat and ran the offense  displaying his all around game. He finished with 19 points five rebounds and five assists. He also platooned the defensive duties with James Johnson to cover Antetokounmpo.

Since December 7, Winslow is averaging 15 points and five assists and two turnovers which is around the time Winslow took over to be the starting point guard with Goran Dragic out due to injury. During that span, the Heat have been climbing the Eastern Conference standings.

For much of the first half of the season, the Heat were struggling and out of the playoff race. Once Winslow was inserted in the starting lineup, the Heat have been winning more games and are currently sixth in the East. Coach Erik Spoelstra is going to have a tough situation handling the rotation minutes when Dragic returns.

Dion Waiters has only played five games for the Heat since returning from his ankle injury in early January. Waiters was out with his injury for a full year and since he has returned, he hasn’t seen much playing time. Waiters only played 12 minutes last night against the Bucks and shot 1 for 4 for two points.

After the game, Waiters was not pleased with his recent and fluctuating playing time.

Dion Waiters just went off about not playing more. ""F— patience" he said. More to come

This was the first of a four game road trip for Miami. The Heat look to bounce back from this loss against the Detroit Pistons this Friday at 7 p.m.