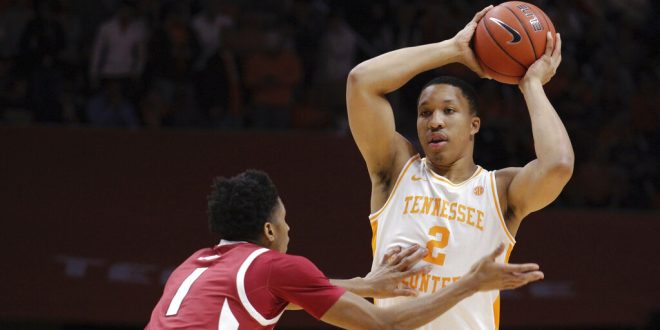 Conference play continues to heat up in the SEC last night as teams move into games this weekend.

The No.3 Volunteers picked up their 11th consecutive win in a beat down last night on Arkansas 106-87. Off the bench, Lamonte’ Turner and Jordan Bowden put up 40 points combined. Turner scored 21 points and hit 6 of 8 shots. Bowden put up 19 points and was 6 for 7 shooting. The depth on the team is looking for a good season for the Volunteers.

As for Arkansas, they just didn’t stand a chance last night. With just five minutes into the game, the team suffered being down 14-0 and couldn’t stop with fouling. The team is now 1-3 in the SEC.

Up next for the teams, Tennessee hosts Alabama on Saturday and Arkansas travels to Mississippi.

The No. 12 Wildcats came up 20 points over the Bulldogs last night moving them to 3-1 in the SEC. Freshman point guard Ashton Hagans put up 23 points for Kentucky ensuring their victory. The Bulldogs went into the half only down by four, but a rocky second half left them no chance.

An upset for the Gators last night that’s for sure. With just 3.4 seconds left in the game, Quinndary Weatherspoon was fouled and dropped the winning layup for the Bulldogs. The team was able to pick up their first conference win.

The Gators played a close game and just didn’t keep Weatherspoon in front the last few seconds. KeVaughn Allen put up 17 points, Andrew Nembhard had 13 points and Noah Locke had 12 for the Gators.

The Gators will travel to Athens this weekend to take on the Georgia Bulldogs. Both teams sit 1-3 in conference play and are hoping to move their record closer to .500. We’ll see if the Bulldogs can improve in the backcourt or if the Gators can pick up a win on the road.

Tip-off is at noon on Saturday.