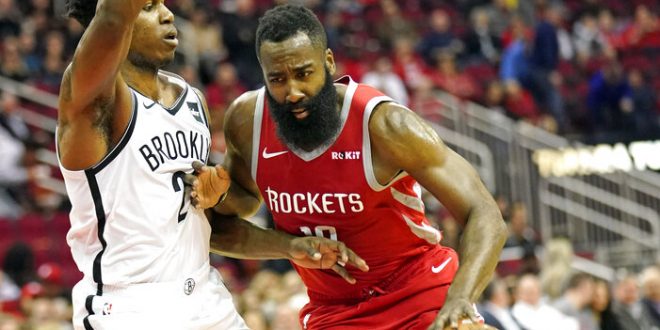 For the second consecutive game, James Harden scored over 50 points for the Houston Rockets. However, it wasn’t enough to defeat the Brooklyn Nets on Wednesday night.

The Nets captured the victory 144-143 in overtime after being down by 11 points with two and half minutes to play. Spencer Dinwiddie knocked down three consecutive three-point shots with under 30 second left to play.

Harden may have overshadowed the come from behind win for the Nets though.

The Rockets shooting guard dropped 58 points on 16 of 34 shooting while sinking 21 of his 23 free throw attempts. However, he was only 5 for 19 from three point range.

The scoring output marks the ninth time in 12 games that Harden has scored over 40 points in a game. It also was the 18th straight game that he scored more than 30 points.

Harden is having an exceptional offensive run over the past month. Over the last 21 games, Harden is averaging 40 points per game. The streak that Harden is on ranks fifth all-time in consecutive games averaging 40 or more points.

Despite the incredible offensive output, Harden was disappointed by the lose and his team blowing a double-digit lead late.

Nets Head Coach Kenny Atkinson was pleased with his teams victory and how they grinded out the victory.

Dinwiddie lead the Nets with a team high 33 points. He scored 25 of those points in the fourth quarter and overtime to propel the comeback.

Small forward DeMarre Carroll also was crucial in the win. He scored 22 points in 35 minutes of game play coming off the bench.

The Nets fended off an NBA record 70-three-point attempts by the Rockets, who only made 23 of them. Combined, the teams attempted 106 three’s, the highest combined total in NBA history.