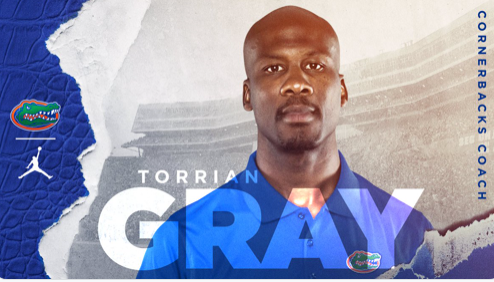 There is no denying that Teez Tabor, Quincy Wilson, Marcus Maye, and Duke Dawson are some of the most talented players to ever represent The Swamp. However, that group was developed into three second-round picks (Wilson/Tabor, 2016/Dawson, 2017) and one third-rounder (Maye, 2016).

The common denominator for all that talent was Torrian Gray during his one year in Gainesville.

In 2016, the Gator football team allowed less than 93 passing yards per game — the lowest in the nation. In that same season, Florida’s defensive back unit allowed just eight passing touchdowns. Comparatively, the 2018 team ranked 13th in passing defense (206 ypg).

After Gray’s superstar year, he took a job with the Washington Redskins. He transformed the Redskins passing defense from 28th to 10th in his first year, but the team dropped to 15 this season.

However, he was a coach long before taking the job in Gainesville. Torrian Gray’s 19 years of coaching experience started at Virginia Tech, his alma mater. He developed Kam Chancellor, Brandon Flowers, Victor Harris, Jayron Hosley, Kyle Fuller, and Kendall Fuller during his 10-year tenure with the Hokies.

In a press release, coach Dan Mullen praised Gray’s coaching and recruiting skills, as well as his relationship with other staff members.

“His track record of preparing players for the NFL and his success at coaching at that level speaks for itself. Meanwhile, with his strong recruiting ties to the state of Florida and the fact that he played for coach (Todd) Grantham in college will make this transition seamless.”

Gray, a Lakeland native, is sure to be an integral part of establishing the pipeline between 2018 State Champions Lakeland High and UF.

Besides the coaching staff, it looks like Florida corners are pretty excited for Gray to don the orange and blue again.

Sophomore cornerback CJ Henderson also got in on the fun, retweeting a picture of Wilson and Tabor from Gray that dates back to 2016.

The Gators are trying to get a home run finish for the 2019 recruiting class. One of the biggest targets left on the board is Gator legacy cornerback Kaiir Elam. Elam’s recruitment is looking like a Florida-Georgia battle… even more so now that Warren, his primary recruiter at UF, made the flip to the Bulldogs.

Also, Florida still has yet to replace defensive line coach Sal Sunseri after he left Gainesville for Tuscaloosa. But so far, it looks like the program is excited about Gray’s return.