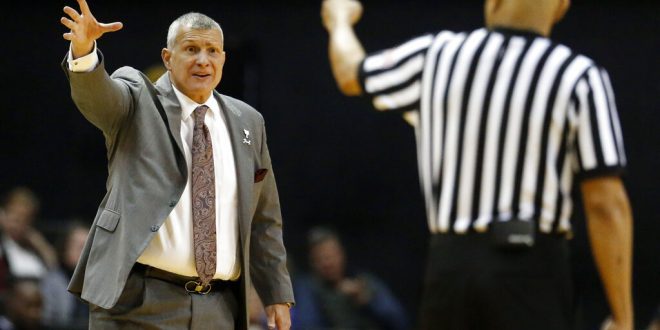 South Carolina coach Frank Martin questions a call during the second half of the team's NCAA college basketball game against Vanderbilt on Wednesday, Jan. 16, 2019, in Nashville, Tenn. (AP Photo/Mark Humphrey)

The Tigers enter the matchup two spots down from No. 14 in the AP Top 25 poll. They beat SEC West rival Texas A&M, but lost to now No. 8 Kentucky. Meanwhile, the Gamecocks’ loss to LSU on Saturday broke a five-game winning streak. That winning streak included SEC teams such as Florida, Mississippi State, Missouri and Vanderbilt.

Some of South Carolina’s biggest threats this season have included freshman A.J. Lawson, who had a stellar game despite the loss to LSU. Lawson led the Gamecocks by 18 points in 38 minutes. Senior Chris Silva has dominated from the free throw line, but his continuous foul trouble in the Gamecocks’ past two games had his minutes limited.

He fouled out within just eight minutes of play against LSU. However, Silva has also been a bright spot. He’s one of the Gamecocks’ leading scorers for the season, averaging 11.9 points per game.

The Gamecocks struggled immensely on defense against LSU. They only managed to put up 29 rebounds, whereas LSU had 49.

Can Auburn Stay Ahead?

Auburn’s 79-70 win over South Carolina at the end of last year’s regular season gave Auburn the SEC regular season title. That was the last time both teams met. Senior Bryce Brown leads the Tigers with 16.9 points per game, and is one of three players on the team averaging double figures. Brown ranks 4th in the entire SEC in points.

Junior Jared Harper has been helpful on the offensive front, ranking first in the SEC in assists with 6.6 points per game. Auburn ranks second in scoring offense out of the entire SEC, which could pose a challenge for South Carolina given their trouble with LSU.

Each team comes off of individual losses against tough ranked teams. South Carolina looks to avenge its last meeting against Auburn, but Auburn looks to bounce back from its slump in the polls.