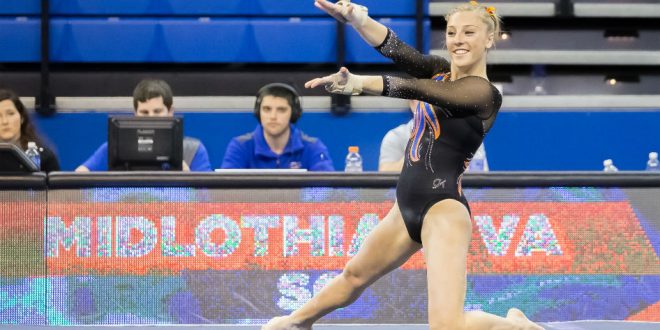 McMurtry was awarded the NCAA Today’s Top-10 award that is given to ten student athletes for their achievements in their sport, in the classroom and in the community.

“It is an honor to be selected as one of the recipients of the Today’s Top 10 award. To be recognized with all these athletes who have accomplished so much not only in the classroom and their respective sports, but also in the community, is very humbling,” McMurtry said. “I am proud to be representing the University of Florida and Florida gymnastics.”

During her acceptance of the award, she had numerous supporters in the house. Her family, head coach Jenny Rowland and UF Athletic Director Scott Stricklinwere all in attendance. Also, former teammates Bridgette Caquatto, Rachel Slocum and Lindsey Walker were there to support McMurtry.

“Tonight was an amazing experience. So happy that I could be part of this event to honor Alex and all these other accomplished individuals. Alex was a leader and role model for her teammates in both academics and athletics throughout her Gator career,” Rowland said. “What an outstanding representative she’s been for this University, Gator athletics and the sport of gymnastics.”

While at UF, McMurtry had a storied career. She holds or at least shares a portion of every Gator gymnastics record. Most notably, she holds the record for the best all-around score in team history at 39.825.

Throughout her four-year career, she won four national titles, one as a team in 2015 and three individual titles. She won the 2017 all-around national title while also claiming the uneven bars championship. In 2018, she won the title in the vault.

While her accolades in gymnastics are impressive, her work outside of the sport are equally, if not more impressive.

To add to her accomplishments, she is the only Gator ever to receive the NCAA elite 90 award. The award is given to the student-athlete who has the highest GPA at any of the NCAA championship sites.

Congrats to Alex for this latest award in a much honored career!#WeChomp#GoGators pic.twitter.com/JZ0MO5Nyfy

McMurtry joined an elite list of Gators when she received the award. She joined the likes of Tim Tebow, Kelsey Bruder, Stephanie Nickitas, Megan Neyer and Tracy Caulkins. This makes McMurtry only the seventh Gator ever to win the NCAA Today’s Top-10 award. 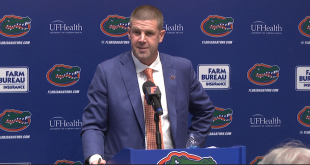 The former Lousiana Rajin’ Cajun, Billy Napier, is now a Gator. The details of his …