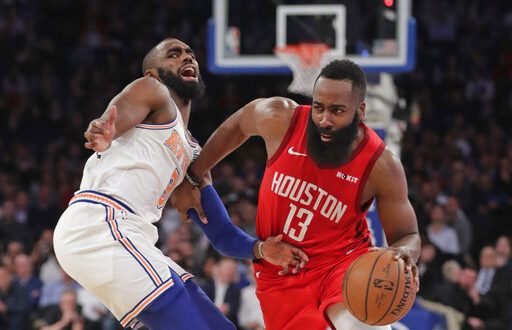 James Harden is so hot he might literally be on fire.

The Beard dropped a career-high 61 points in a thriller in Madison Square Garden against the New York Knicks.

His big night even broke the Rockets franchise record for points scored in a game.

Harden became the first player since Shaquille O’Neal in 2000 to score over 60 points and grab 15 rebounds in a game.

His 61 points tied him with Kobe Bryant for the most scored by an opponent in MSG and finished one shy of Carmelo Anthony’s building record of 62.

“I wanted to be aggressive tonight like I’ve been all season,” Harden said after the game. “I’m just happy we came away with the win.”

Harden is averaging over 45 points per game since the start of 2019. He even rang in the New Year on Jan. 3 with a 44-point triple-double. It was his second straight triple-double with forty plus points.

He is scoring from every conceivable avenue in the month of January:

Harden on playing at MSG:

Harden’s streak is resurrecting some ghosts of NBA’s past.

His performance against the Knicks tied him with Bryant and Chamberlain for the second-longest streak averaging 50 points (5).

Harden on his name being among the greats:

Harden is even on pace to be the only player since Michael Jordan to finish a season averaging 35 points, eight assists, five rebounds and two steals.

It might be winter, but Harden is definitely living in summer considering this torrid stretch. We’ll see if the cold air cools him off at some point.