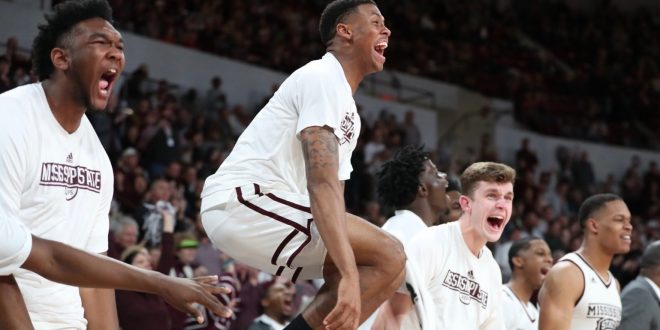 No. 22 Mississippi State and Alabama Battle to go 4-3 in SEC Play

The No.22 Mississippi State Bulldogs will face another Alabama team this week, this time in Tuscaloosa to face the Crimson Tide.

Alabama and Mississippi State are .500 in conference play, so both teams are hungry for a win. The Bulldogs are looking to continue their momentum after defeating the no. 16 Auburn Tigers, 92-84, in Starkville on Saturday.

However, Mississippi State has a 2-2 away-game record compared to a 10-1 home-game record. Their only conference away-game win was against the Vanderbilt Commodores (71-55) on Jan. 19.

Mississippi State has a dynamic duo who have proven to be successful players for the Bulldogs. Both Quinndary and Nick Weatherspoon are explosive on both sides of the ball for Mississippi State.

Against Auburn, Quinndary scored 27 points during his 37 minutes of play. He was 11-11 from the free-throw line, 4-5 from beyond the arc and 6-9 from the field. The senior guard has had a consistent offensive performance throughout the season. Saturday’s game marked Quinndary’s seventh game this season in which he scored at least 20 points.

He ranks second in the conference, only to Tennessee forward Grant Williams, in points per game (17.3). And on defense, 74 of his 107 rebounds are from the defensive end. He has improved his rebound record in the SEC to 5.6 rebounds per game.

As for Nick Weatherspoon, the sophomore guard has scored double-figures in four of his last seven games. In the most recent matchup, Nick locked in 12 points, grabbed three rebounds and three assists. In comparison to the rest of the conference, Nick ranks thirty-ninth in points per game (10.3 ppg). However, he seems to be most valuable on defense.

Against Auburn, he had three steals and a team-leading 10 steals during SEC play. He averages 1.7 steals per game, ranked within the top 10 of the conference.

On the other hand, Alabama hopes to shrug off its disappointing 73-68 loss against the Baylor Bears in the Big 12/SEC Challenge. While it was a close game for 40 minutes, Alabama struggled to defend Baylor. In fact, the Bears scored 24 points off turnovers, compared to the Tides 13 points off turnovers. Furthermore, the Bears had 18 second-chance points.

Alabama will host No. 22 Mississippi State on Tuesday, Jan. 29 with tip-off set for 7:30 CT. The two teams will meet again on Feb. 12 in Starkville.