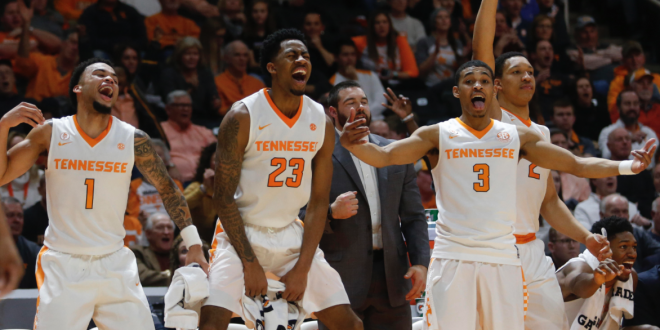 The Tennessee Volunteers have maintained their top ranking among the college basketball world for the second straight week. Being deemed as the top team in the country is exciting in the moment. However, every team is going to come at you with major intensity and do everything they possibly can to dethrone you from the top spot. This is exactly what South Carolina will attempt to do on Tuesday night as they host the 18-1 Volunteers.

Tennessee is now the #1 team in College Basketball. @Vol_Hoops pic.twitter.com/wtQ9nh71d8

While the Volunteers are led by two of the most dominant players in the country, they also have an elite supporting cast. Grant Williams is on pace to win SEC player of the year for the second straight year. The junior is leading the SEC with 20.2 points per game. He is certainly not a one dimensional player, also averaging 7.3 rebounds, 3.6 assists, 1.6 blocks and 1.2 steals per game. Williams is an elite scorer in the interior, a rebounding machine and consistently uses his double teams to create open opportunities for his teammates.

His co-star, Admiral Schofield, is certainly carrying his share of the load. The senior out of Illinois is averaging 16.6 points, 6.6 rebounds and 2.6 assists per game on 40.9% efficiency from beyond the arc. Schofield, who is listed at 6’6″, 241 pounds, is built like a middle linebacker and uses his strength to attack the rim with authority.

The rest of the core contributors are Jordan Bone (13.1 points, 6.3 assists), Lamonte Turner (11.5 points), Jordan Bowden (10.9 points), and Kyle Alexander (9.3 points, 7.4 rebounds). All six play over 25 minutes per game and are the reason why the Volunteers are ranked 3rd in the country in adjusted offensive efficiency.

What to Expect From South Carolina?

The Gamecocks have had a rollercoaster of a season so far. They finished non conference play an abysmal 5-8, including bad losses to Stony Brook, Providence, Wofford and Wyoming. It looked like Frank Martin’s squad was going to be deep in the trenches of the SEC standings.

However, Frank Martin has done what he seems to do every single year, which is figuring out a way to get the most out of his players and grind out wins. His team currently sits at 5-1 in SEC play, including victories over Florida, Mississippi State and Auburn.

Frank Martin, man. South Carolina 5-1 in the SEC after beating Auburn. Already beat Florida and Mississippi State in league play. This is a team that was 4-7 against Division-I competition in the non-conference.

It’s surprising that they currently sit towards the top of the SEC considering they rank outside the top 100 in offensive and defensive efficiency. The Gamecocks have a very poor effective shooting percentage of 47.6% and convert threes at 31%, which ranks in the bottom 50 in the country.

South Carolina controls the pace of the game extremely well. They only use 15.5 seconds on every offensive possession, which is the 22nd quickest pace in the nation. On the defensive side of the ball, they hold their opponents to 17.9 seconds per possession, which is one of the slowest marks in college basketball.

Even with limited talent, Frank Martin has always figured out a way to control the game. This is one of the main reasons why his teams have always been successful. This will be Martin’s biggest challenge so far this season, so we’ll see if he can control the pace and tempo against the top ranked team in the country.

The game will be played in Columbia, South Carolina on Tuesday night at 6:30 p.m. on SEC Network.

Previous Georgia vs. Arkansas: SEC Men’s Basketball Preview
Next No. 22 Mississippi State and Alabama Battle to go 4-3 in SEC Play