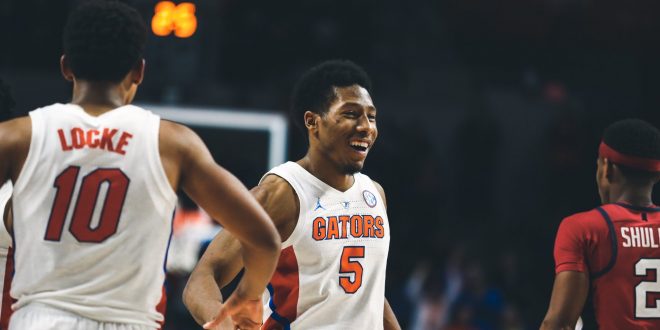 Gators Pick Up Huge Win Against Ole Miss in Overtime

The Florida Gators defeated the Ole Miss Rebels at home by a score of 90-86 in overtime.

It’s not much of an exaggeration to say that the Gators had their backs against the wall coming into their home match-up against Ole Miss. Mike White and his team have endured some tough losses. The games against Oklahoma, Michigan State, South Carolina, Mississippi State, and TCU were all within 5 points. The losses against Tennessee and Butler were both winnable games down the stretch. Florida seems to have a knack for playing in close games, but not winning them.

That wasn’t the case against the Rebels. The Gators made clutch shots when they needed to and pulled out a close win against a quality opponent. They gave themselves a little breathing room with this win. The Gators improved their record to 12-8 overall and 4-3 in conference play. Every game for the rest of the season will have a big impact on Florida’s postseason fate.

Keyontae Johnson commented on if this game was a “must-win” for the team:

.@K5allen1 with a big bucket at the end of regulation, #Gators get the win in OT. See all the highlights… pic.twitter.com/zJuzuB1e9e

The Freshmen Keep it Rolling

So much of what Florida does relies on the freshmen trio of Andrew Nembhard, Noah Locke, and Keyontae Johnson. All three have cemented themselves as key players in Mike White’s rotation. Nembhard brings the play-making, Locke brings the scoring, and Johnson brings a whole lot of energy, athleticism and hustle. All three had great performances in the win.

Nembhard had 12 points on 4-5 shooting to go with 6 assists and 4 steals. Locke ended up with 22 points on 7-13 shooting. He led the team in both scoring and in minutes played. Johnson had a career-high 15 points and recorded 6 rebounds and 2 assists. He was also a team high +18. After the game, coach White said “collectively, this is the best game our freshmen have played.”

KeVaughn Allen was having a rough night against the Rebels, but that changed in an instant. The senior guard hit a huge three with 2.7 seconds remaining to tie the game and send it to overtime. Prior to the shot, Allen was 0-6 from beyond the arc. He made the biggest shot of the game and perhaps the biggest shot of Florida’s season. Allen came into the game averaging 18 points per game in his last 6 outings. He added to his streak of impressive games, finishing with 21 points. Aside from Allen’s huge shot, he made an incredible hustle play near the end of overtime to help seal the win. Coach White spoke about Allen’s growth as a player:

The Gators are about to embark on an extremely tough stretch of their schedule. On Saturday, Florida hosts the Kentucky Wildcats for a 4:00 tip-off. After Kentucky, the Gators will hit the road to play the Auburn Tigers and then the Tennessee Volunteers.