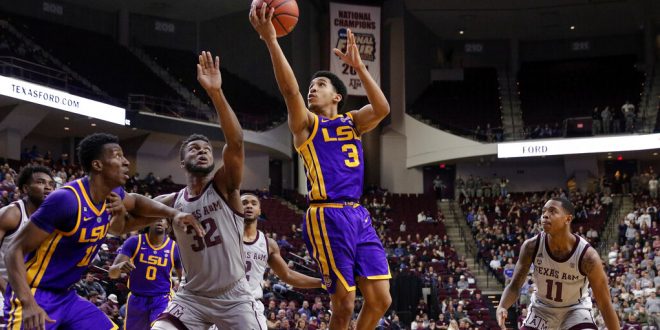 COLLEGE STATION, Texas — If any team is in deep water in college basketball, it is not No. 19 LSU. Sophomore point guard Tremont Waters had a shootaround versus Texas A&M, scoring 36 points in 34 minutes on Wednesday night. The Tigers’ 72-57 win (17-3, 7-0 Southeastern Conference) is the team’s 10th-straight victory, as LSU remains tied with top-ranked Tennessee at the top of the conference standings.

Aggies fans watched on at Reed Arena as Waters continuously scored, equalling his combined point-total versus Texas A&M last year in just one game this season. Besides points, the Connecticut native hit all eight of his free throws, gathered seven rebounds and dished three assists. In his last 13 SEC games, he is averaging 21.4 points, 6.4 assists and 1.7 assists (.484/.418/.773 shooting). The Tigers are 10-3 in that span.

Head Coach Will Wade on the battle between Waters and Aggies point guard TJ Starks (who finished with 21 points in 35 minutes):

“I guess he likes it here. I think he just played an overall great floor game, he got going early, he was aggressive, and he was attacking and when he plays like that our team feeds off of that. [TJ] Starks is obviously a very good player. Starks had a great night and it was just a good point guard matchup.”

Looking like an NBA-talent again, the Waters’ decision to return to Baton Rouge after his freshmen season is paying off.

Texas A&M (8-11, 1-6 SEC) has now lost four straight games in the conference, with only a 65-53 SEC/Big 12 Challenge win over Kansas State stopping it from being four straight overall, too. The Tigers remained in the lead following a Marlon Taylor dunk to make the game 13-11 with 13:58 left in the first half. Matters could get worse, as the Aggies host the No. 1 Volunteers on Saturday night.

Head Coach Billy Kennedy praised Waters performance and said his team let go of the game in the second half.

“Turnovers in the second half and our inability to keep them off the glass allowed them to control the second half and get the win. Tremont Waters is obviously a special player and played very well. I thought the first half we paced the game how we wanted and did some good things.”

However, Kennedy said junior forward Josh Nebo is growing into a leader on his team after 16 points on 80 percent shooting overall, the same efficiency from the charity stripe and double-digits in the rebound column.

“Josh is doing it by example. He had a heck of a game. I thought defensively he was the one guy that was throwing his body around. He had four blocked shots and 11 rebounds. He was a major factor in the game.”

Players finding form remains an issue for Texas A&M, with Florida guards KeVaughn Allen and Noah Locke combining for 58 points in an 81-72 loss and now Waters. Kennedy will have to make a plan, as Grant Williams, a potential NCAA player of the year, comes to College Station averaging 20. 4 points and over seven rebounds a game this season.