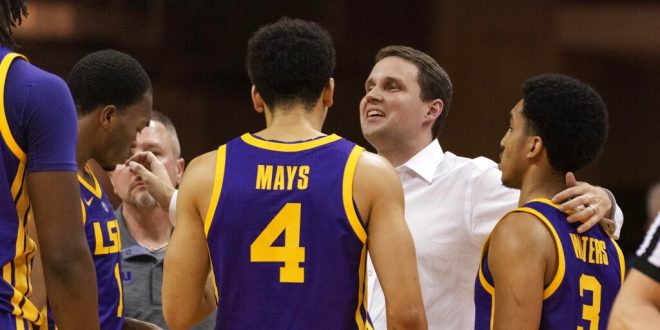 LSU coach Will Wade smiles as he gathers his team during a timeout in LSU's 86-80 overtime victory over Missouri in an NCAA college basketball game Saturday, Jan. 26, 2019, in Columbia, Mo. (AP Photo/L.G. Patterson)

No. 19 LSU trying to extend win streak at Texas A&M

One could say the LSU Tigers are playing pretty well right now.

They’ve won nine straight, with their last loss back in 2018. Their most recent win was at Columbia, Missouri, as the team rallied back from 14 down to secure the victory in overtime. Now, No. 19 LSU looks to put their win streak into the double digits as they take on Texas A&M tonight.

The game will be played in College Station, which will help the Aggies. Texas A&M (8-10, 1-5 SEC) has secured just one win on the road this season. Meanwhile, six of their eight wins have come at their home court. Texas A&M took a big victory Saturday when Kansas State came into town, winning by ten. And being third to last in the current SEC rankings, the team needs to make a statement with another win tonight.

The Aggies are led by TJ Starks and Savion Flagg, each averaging nearly 13 points a game. And Flagg, a sophomore from Alvin, Texas, averages just over eight rebounds a game. That’s good enough to rank Flagg seventh in the SEC in that category. But to come away with a win tonight, the Aggies will need to generate some offense – they are currently averaging 73 points per game. And meanwhile, LSU is currently ranked third in the SEC for points per game with just over 83.

While LSU (16-3, 6-0 SEC) is on a hot streak, they will need their leaders to step up in order to tally their tenth straight W in College Station. The Tigers have four players averaging ten points or more, creating plenty of threats that will be tough to defend.

But Tremont Waters has been the key to several of the team’s victories. The guard is averaging just over 14 points a game, ranking him one of the best scorers in the SEC. Furthermore, he’s had 57 steals on the defensive end this season, the best in the conference. Texas A&M will need to protect the ball so they don’t give up any easy buckets.

Other LSU players stepping up big this season include Skylar Mays, Naz Reid and Ja’Vonte Smart. They will all need to step up tonight if they want to remain undefeated in conference play.