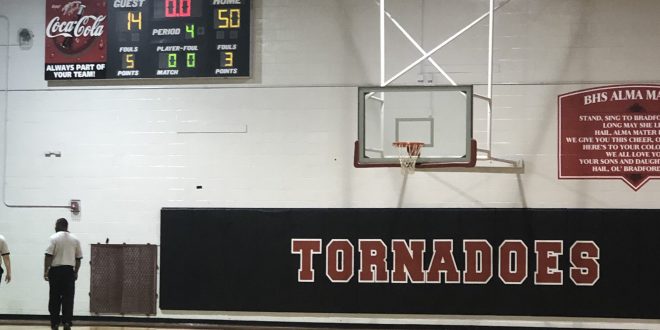 The Bradford Tornados never looked back.

The Bradford Girl’s Basketball team blew out the Baldwin Indians Tuesday night in a 50-14 victory on Senior Night.

Meghan Harris led the team with 12 points and 5 steals, while Olyvia Griffin recorded a double-double with 10 points and 1o steals. Santee Blye also had 11 points.

The Tornados now advance to 8-10 for the season and will play their next game Thursday against St. Augustine High.

The Tornados got off to a hot start as they took an early lead in the first quarter, up 7-2, and never trailed during the game. Solid ball movement created by junior point guard Meghan Harris helped jump the Tornados to a 17-8 lead to end the first quarter.

The Tornados attacked Baldwin throughout the game with a mixture of defenses. They started with man-to-man defense in the first half keeping Baldwin to only 10 points. During the second half of the game, the Tornados switched to a 3-2 zone and then went to a full-court press. 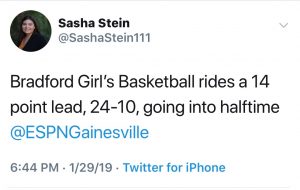 Bradford’s defense kept Baldwin to only 2 points in the 2nd quarter and the defensive switch to full-court press left Baldwin scoreless in the 4th quarter.

” We wanted to preserve our girl’s energy and when we’re up like that that’s what we’ll do,” said Bradford head coach Latasha Smith talking about the switch of defense in the second half.

The mixed defensive pressure led to the team having 23 steals, including Griffen getting 3 steals in a row at the end of the game to seal the victory. Six out of seven players recorded at least 1 steal in the game which resulted in a basket or chance at the foul line.

Bradford showed dominance throughout the entire game with explosive defense and ball movement, every single player scoring. The team also took down 21 offensive rebounds and took a trip to the free throw line 23 times.

Bradford’s win comes from improvements of execution and defense from their previous game where they lost 66-40.

“We realized what we needed to execute from the last game and worked on it this game,” Smith said. “They executed well.”

Sasha Stein is a current UF student aspiring to become a sports reporter/broadcaster.
Previous No. 19 LSU trying to extend win streak at Texas A&M
Next Mizzou Looks to Snap Losing Streak Against Auburn