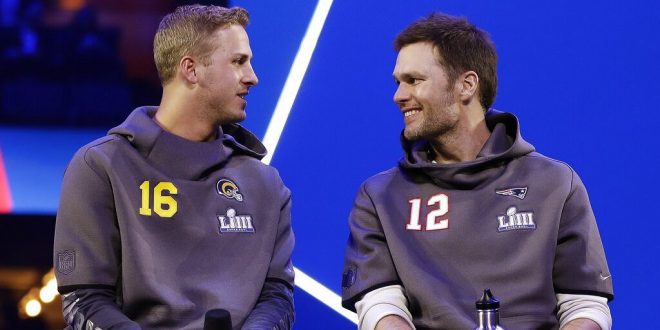 On Sunday, history repeats itself. The New England Patriots and Los Angeles Rams will face off in Super Bowl LIII in Atlanta.

On Feb. 3, 2002, a young Tom Brady made his Super Bowl debut against the Rams, who were then located in St. Louis. That season, the Patriots had an 11-5 record, while the Rams were 14-2 in the regular season. The Rams were expected to get the win. However, Brady and New England won 20-17 and started a modern-day football dynasty.

Since the Super Bowl victory in February of 2002, Brady and the Patriots have made seven more Super Bowl appearances, winning four. The Rams, on the other hand, haven’t made any appearances.

The Ram are no longer the favorites. With the experience between Brady and Belichick on the big stage, the Patriots are the favorites. This is despite having a worse regular season record, as the Rams finished the season 13-3.

Rundown of the Rams

Jared Goff's highlights from the Rams incredible 54-51 win over the Chiefs.

The Rams’ ability to consistently put points on the board is a big reason that they made it to the Super Bowl. They averaged 32.9 points per game in the regular season, compared to 27.3 points per game from the Patriots.

However, in the postseason, the Patriots have risen to another level. They average 39 points per game in the playoffs, while the Rams are down to 28 points per game.

Super Bowl LIII between the New England Patriots and the Los Angeles Rams will kick off on Sunday at 6:30 p.m. on CBS.