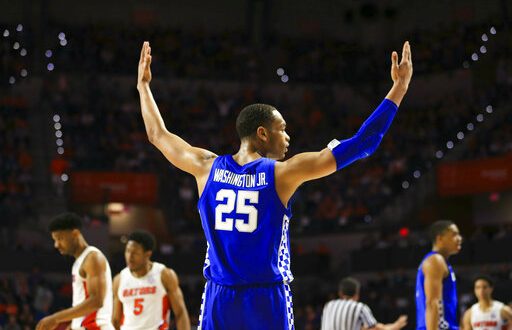 Things are heating up in Lexington as the fifth-ranked team in the country prepares to host the Gamecocks. Kentucky is slated to hold them off, but South Carolina is not to be counted out just yet.

Like @UKCoachCalipari said, we’re only halfway up the mountain. pic.twitter.com/zQoFQE4PPL

Kentucky basketball has been on the hunt. Moving from 18th to 5th nationally in a matter of weeks, the Wildcats are on fire. John Calipari and his squad have not dropped a game since Jan. 5 when they fell to Alabama in their conference opener.

At their last game against Florida, it seemed as if they were in jeopardy at half time, trailing by four points. But then, Kentucky’s defense was unstoppable, allowing Florida’s offense very few opportunities to score while the Wildcat offense went on a 12-0 scoring run, giving them the definitive win.

1st-year guard Keldon Johnson and 2nd-year forward PJ Washington will be key players to watch. They’re averaging around 15 points per game and around 8 rebounds per game, respectively. These dominant offensive players are key for Kentucky’s success, in addition to their teams strong defensive play. Head coach John Capilari commented on his team’s defensive tactics:

Fourth in the SEC, South Carolina has had a very decent season so far. 6-2 in conference play, the Gamecocks have only dropped the ball to #21 LSU and #1 Tennessee. In their last game against Georgia, they did not let up at all, never losing their lead against the Bulldogs.

A key player to watch for South Carolina is 4th year forward Chris Silva. In his past few games, Silva put up 32 points and 4 blocks to take down Auburn, and then 28 points and 2 blocks against Tennessee. South Carolina’s offense will definitely put up a fight against Kentucky’s defense, as these two highly ranked SEC teams duke it out for a telling win.

Watch the Kentucky Wildcats take on the South Carolina Gamecocks on Feb. 5 at 7 p.m. on the SEC Network.

3rd-year Telecommunications student at the University of Florida. Also a member of the Women's Track and Field team.
Previous No. 1 Tennessee Returns Home to Host Missouri
Next National Signing Day Can Cap Off Great Recruiting Class For Gators