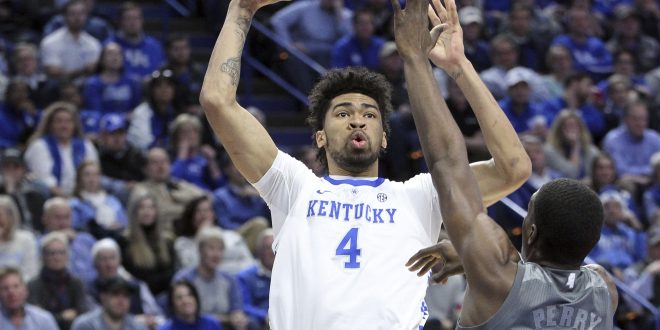 The Kentucky Wildcats are on the road to see the Mississippi State Bulldogs for an SEC match-up on Saturday.

"All of my best teams, numbers didn't matter."

Is this one of @UKCoachCalipari's best teams? Coach reveals in chapter 22 of #TheJourney that he's feeling pretty good about this group. pic.twitter.com/3QgRr1TbfQ

The Wildcats are 19-3 overall and 8-1 in the SEC, this season. They are also ranked No. 5 in the AP Poll. Kentucky is coming off a huge win against South Carolina on Tuesday where they beat the Gamecocks, 76-48. Sophomore forward PJ Washington was the points leader for a total of 20 points, 5 rebounds and 1 assist.

Calipari gives credit to defense and practice on the court for Kentucky’s success.

Kentucky is an unstoppable force in NCAA and SEC basketball, especially with Washington averaging 13.8 points this season, who averaged 20.4 points in his last five games. Despite Washington’s strides, Johnson is still the season leader in points with 307, 4 points ahead of Washington.

However, Johnson’s recent performances haven’t been up to par, only averaging 10.8 points in his last five games. Despite that, it doesn’t hurt the Wildcats with Washington picking up the slack. You can expect this when Kentucky plays MS State.

The Bulldogs are 16-6 overall and 4-5 in the SEC, this season. MS State lost to the LSU on Wednesday, 92-88, in overtime. Despite the loss, there was an explosive performance from points leader and senior guard Quinndary Weatherspoon, who scored a total of 27 points (his season high), 2 rebounds and 2 assists against the Tigers.

Reggie Perry scored 19 points, and Aric Holman and Tyson Carter both scored a total of 12 points against LSU.

MS State has had a difficult season, coming close to victories, but losing them in the end. Their overall season record isn’t as bad as compared to other SEC teams, but they are lacking in winning conference games, giving them such a low ranking in the SEC itself.

The Bulldogs seem to have no trouble making points, with Weatherspoon averaging 22.8 points and Perry averaging 15.2, their last five games. However, that’s all the man power they have when it comes to scoring.

In addition, their defense will be put to the test when trying to keep Kentucky away from the basket. That will not be an easy feat to accomplish, but one that they must do to beat the Wildcats.

Catch the game tomorrow at 1 p.m. on CBS.

I am a fifth-year journalism major, specializing in sports and media. My favorite sport to watch and cover are college and NFL football. When I'm not doing that, I enjoy hanging out with my cat, going to concerts and traveling.
@sportsabrina
Previous Gator Baseball Gets Set For Their Annual Alumni Scrimmage
Next Gators Visit Rocky Top Looking For Revenge Against Vols