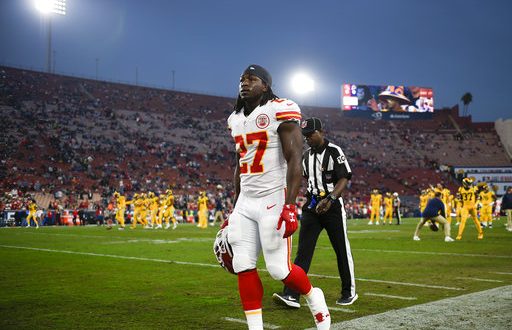 Kansas City Chiefs running back Kareem Hunt walks off the field prior to an NFL football game against the Los Angeles Rams Monday, Nov. 19, 2018, in Los Angeles. (AP Photo/Kelvin Kuo)

Kareem Hunt returns to the NFL, signs one-year deal with the Browns

Former Kansas City Chiefs running back Kareem Hunt has been granted a ticket back to the NFL after facing trouble last season. The Cleveland Browns signed Hunt to a one-year contract on Monday.

The Chiefs released Hunt in November after controversy emerged. A video of Hunt shoving and kicking a woman in a hotel in early 2018 was uncovered. Then, a separate incident came to light where Hunt allegedly punched a man in Ohio last summer. After his release, he was placed on the commissioner’s exempt list. The NFL launched an investigation shortly after.

Despite locking down a contract, Hunt’s status remains uncertain. The terms of his contract classify him as a restricted free agent after the year, with the Browns in control of his rights after the season. The ongoing investigation leaves Hunt on the commissioner’s exempt list, which makes him ineligible to play. Additionally, the consequences of the investigation could potentially lead to a six-game suspension or more.

Browns’ general manager John Dorsey drafted Hunt to the Chiefs in 2017, where Dorsey was GM that year.

Browns gave RB Kareem Hunt a one-year deal, per source. After that deal is over, Hunt will be a restricted free agent for Cleveland, so the Browns control his right anyway.

After the signing was announced, Hunt released a statement through the Browns, expressing remorse.

“First off, I would like to once again apologize for my actions last year. What I did was wrong and inexcusable,” Hunt said.

“I am committed to following the necessary steps to learn and be a better and healthier person from this situation … I’m a work in progress as a person, but I’m committed to taking advantage of the support systems that I have in place to become the best and healthier version of myself,” Hunt added.

Hunt had two productive seasons in Kansas City. He earned a bid to the 2018 Pro Bowl as a rookie, after leading the NFL in rushing yards in 2017. Hunt was a fundamental part in earning the Chiefs’ Wild Card spot in the playoffs that year. He followed up his debut season with a solid season in 2018.