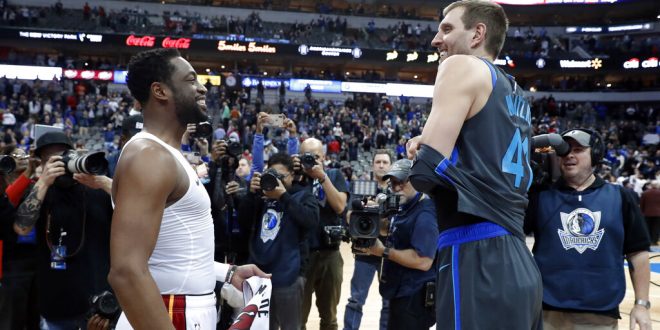 The Miami Heat defeated the Dallas Mavericks 112 – 101 last night in Dwyane Wade’s final appearance at Dallas. Wade relived his fondest memory at the American Airlines Center during his pregame shoot around.

Rewind to Tuesday, June 20, 2006. Wade and company defeat the Mavericks in the NBA Finals to achieve the Heat’s first championship in franchise history.

Wade wasn’t as dominant as his 36-point performance to raise the Larry O’Brien trophy 13 years ago, however, he was still extremely sharp from the floor. The 37-year old veteran went off for a team high 22 points on 9-14 shooting from the floor.

He took efficient shots and pulled out his bag of tricks on a couple of offensive possessions off transition. Wade isn’t known for knocking down three-pointers yet he still got one to go down on three attempts.

Hall of Famers Wade and Dirk Nowitzki were going at each other all night, stealing the show in its entirety. They were trading shots like boxers in the beginning of the game.

However, Nowitzki ended with just 14 points on 5-14 from the floor. Nowitzki and Wade didn’t dwell on their rivalry and seemed to have left all their past troubles behind them.

Both players swapped jerseys after the game, showing signs of respect to one another. Plus, this won’t be the last time that these veterans will share the floor. They both made it on to the 2019 All-Star game roster in Charlotte, North Carolina and will play against each other this upcoming Sunday.

Some other Heat players who contributed last night were Josh Richardson, Justise Winslow, and Dion Waiters.

Richardson notched 14 points and six assists, two games after dropping a career-high 37 points on the Golden State Warriors. This stat makes it 13 games in a row where Richardson supplies a double-figure outing on the scoring column.

Furthermore, Winslow dropped 11 points, his lowest since the Heat’s loss against the Sacramento Kings, where he only amounted to five points. However, he dominated on the boards with 11 rebounds and distributed the ball fairly well with six assists. This makes it his sixth double-double this season alone and only his ninth of his young career.

Dion Waiters had his second 20-point game in three games. He knocked down three three-pointers on eight attempts and was a perfect three-for-three from the charity stripe. One of those free-throws came in after an aggressive drive to the rack and getting the and-one.

For the Mavs, rookie Luka Doncic had himself a fantastic night and almost achieved his fourth triple-double of the season. The Slovenian stud has had a phenomenal past couple of games as of late.

In the last six games, Doncic has averaged 23.5 pts, 7 asts, and 9.1 rebs, including a game against the Charlotte Hornets where he corralled his third triple-double of the season.

It’s scary for other Western Conference teams to know that Kristaps Porzingis will be a part of the Dallas Mavericks in the upcoming season. This trade can potentially make them a potential playoff-caliber team.

The Heat conclude their six-game road trip against the Philadelphia 76ers on Thursday, tipoff is at 7 pm.

On the other hand, the Mavericks host the hot Denver Nuggets on Friday night, tip-off is at 8:30.

Recent grad from the University of Florida. Editing all articles on here while helping out the newbies. Love all things basketball.
@@MarcoJMartinez_
Previous Preview: Gators men’s golf dialing in on victory on home turf
Next Florida Lacrosse set to play Home Opener