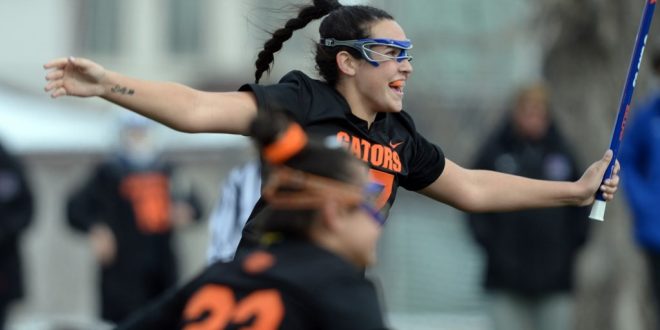 Love is in the air as we arrive at Valentines Day 2019. However, the Florida Gators lacrosse team are hoping that wins are in the air as well.  The No. 6 Gators will open up their home schedule at Donald R. Dizney Stadium on the love holiday Thursday night at 7 p.m. and they’ll be taking on a worthy opponent in No. 2 ranked Maryland.

The Gators kicked off their season with a quality 16-9 road win over No. 17 Colorado last Saturday. Meanwhile, the Terrapins of Maryland earned their first victory at home with a win over George Mason.

This is the fifth matchup between the two top-programs with Maryland holding the advantage at 4-0. Last season’s meeting was decided by just two goals with a final score of 16-14. In last years game, Gator midfielder Sydney Pirreca recorded her career-best six goals. Since 2011, Maryland has the most wins of any D1 women’s lacrosse team with 172 wins. The Gators follow suit in elite company and are just behind the Terps with 139 wins.

Head Coach Amanda O’Leary wants the team to focus on the important things going into this game.

“We just want them to have composure. We have played this team numerous times, so the big thing for them is recognizing where our strengths lie and playing to our strengths. We need not to focus on Maryland and focus on ourselves at this point.”

The second-ranked Terrapins are the second of eight Top-25 opponents for the Gators this season.

Florida’s game tonight against Maryland starts at 7 p.m. However, fans will want to get there early to snag a fresh giveaway.