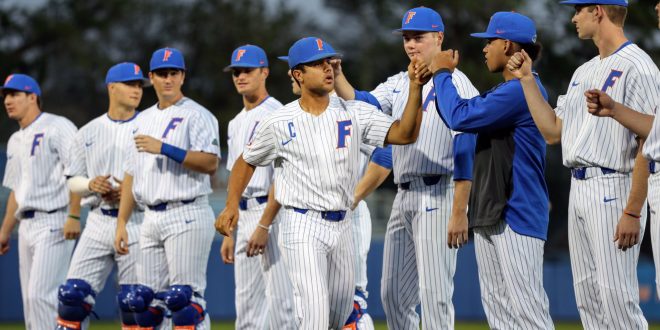 Plenty of walks, errors, and an almost four hour running time made the Florida Gators’ baseball 2019 season opener one to remember.

In the first of a  three-game weekend series with the Long Beach State Dirtbags, the Gators were able to pull the win, 8-2.

Florida’s starting pitcher, Tyler Dyson struggled with consistency in his Friday debut to kick off the 2019 season.  To illustrate, Dyson issued his fourth walk after issuing a wild pitch but still reached his 100th career strikeout in the game as well.

He threw 72 pitches, striking out two and allowing one earned run in 3.1 innings.  Gator coach Kevin O’Sullivan says Dyson had been throwing well before his Friday start.

To start the fourth inning, sophomore lefty Jordan Butler entered the game and he would pick up the win in relief, tossing two scoreless innings and striking out two.

Then, freshman Ben Specht entered in the sixth inning and threw 34 pitches, walking two and striking out one in 1.2 innings; he was able to get out of a jam with a line-drive 6-4 double play.

Sophomore Justin Alintoff entered the eighth inning and walked one but he also struck out the side.  Finally, the pitching changes for Florida came to an end with freshman Kris Armstrong pitched the ninth inning, walking one and striking out one while allowing no runs.

Florida opened the scoring early in the game, plating four runs in the first inning.   Wil Dalton drove home two runs with a base hit to get the Gators moving offensively.

#Gators are on the board! A two-run single from @Wil_Dalton8 brings in @Brady_M27 and @NellyNel0221.

Later in the inning, Brady Smith singled to center field, allowing freshman Kendrick Calilao and Dalton to score to give the Gators a 4-0 lead.

.@tydyse18's scoreless through three with 4 Ks!

Later, Florida would add four more runs in the seventh inning, the big play being a three-run error on a ball that the Long Beach State left fielder misjudged to score three of the runs.

We've now won six season-openers in a row. See you all tomorrow at 4 p.m. pic.twitter.com/q6iQHHoLFs

Florida freshman Kendrick Calilao became the first true freshman to start at first base on Opening Night during the Kevin O’Sullivan Era.

Florida has now won on opening night six years in a row and Friday’s matchup was longer than any game played by the Gators in 2018 running three hours and 58 minutes long.

Florida’s Tommy Mace will take the mound against the Dirtbags on Saturday. First pitch is at 4 p.m. You can catch the game live on ESPN 98.1 FM/850 AM WRUF.