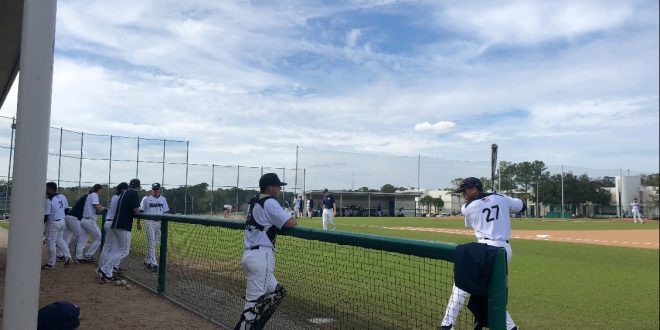 The Santa Fe Saint’s baseball team had its eight-game winning streak snapped Friday afternoon with a 7-5 loss to the St. Petersburg College Titans.  A huge two-run home run from St. Pete’s Orlando Arevalo in the top of the seventh inning gave the Titans a 4-2 lead that allowed them to carry that wave to victory.

The surprising loss to the Titans (3-8) gave the Saints only their second loss of the season, dropping to 13-2.

Not only did the Saints lose an eight-game winning streak, but they also lost a 37 scoreless innings streak too. During the second inning of the game, St Pete’s Jonathon Rodrigues had an RBI single to allow Dennis Flipovski to score from third base, giving the Titan’s a 1-0 lead.

The game had plenty of ties as the Saints were able to set the game 1-1 in the bottom of the third inning when Jonathan Logsdon was hit by a pitch with bases loaded, allowing Zach Hand to score.

The Titans answered right back at the top of the fourth with an RBI single by Mike Novak, giving the Titans a 2-1 lead.  In the bottom of the fifth, Santa Fe’s Parker Biederer hit a sacrifice fly again leading Hand to score for a 2-2 game.

The Arevalo homer and a steal of home by Josue Rangel gave St. Petersburg a 5-2 lead going into the bottom of the seventh.  Santa Fe’s Kyle Marquis hit a home run to cut the lead to 5-3. This allowed the Saints to creep to within a run in the eighth inning after Logsdon got a nice hit to left center, allowing Garrett Mathes to score.

But, it wasn’t enough. In the top of the ninth, Dustin Harris hit a two-run homer to put St. Pete up 7-4.  The Saints were only able to score once in the bottom of the ninth but it was too little, too late.

The Saints have shown consistency and execution throughout the season. They look to bounce back when they face Florida Southwestern State College for a doubleheader Saturday in Fort Myers.

Sasha Stein is a current UF student aspiring to become a sports reporter/broadcaster.
Previous Eight Former Winners Set to Compete in the 61st Annual Daytona 500
Next No. 3 Gators Baseball Open 2019 Season With A Win