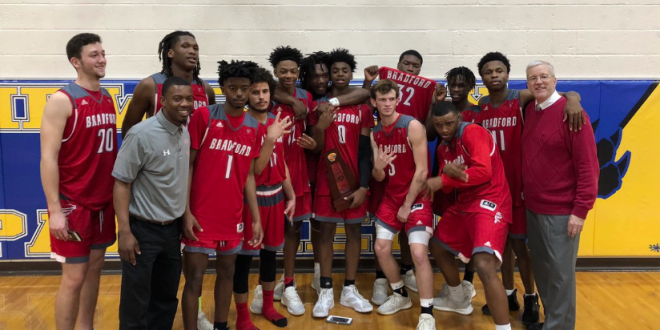 The Bradford Tornadoes boy’s basketball team are now district champions for the fourth consecutive year Friday night at Newberry High School with a tight 73-70 victory against a feisty bunch of Fort White Indians.

The game started off slow but picked up as each team ran from baseline to baseline with reckless abandon. Never going too far above a double-digit deficit, the Tornadoes fought off a low scoring night from the team’s usual leading scorer Jordan Lee (6 points, sat out the fourth quarter with an undisclosed injury), to beat the Indians in the end.

Bradford rode solid games from the other guards on the team; Jalen Williams, Matt Crawford, and Jordan Buie. That trio combined for 40 points going 5 for 7 from behind the arc.

Each team had its fair share of free throw attempts. Bradford went 20 for 37 (54.1%) from the charity stripe and Fort White went 17-24(70.8%). As Fort White fouled more and more their margin of victory kept slipping. They then found themselves with three starters disqualified because of fouls with under two minutes.

Inching close to a minute left in a two point district tourney final. Ft. White has three players out of the game with 5 fouls. Ft White up 68-66 @ESPNGainesville

Senior Matt Crawford was visibly upset during the start of the third quarter when he was benched for picking up his third foul. Due to miscommunication, the coaching staff believed Crawford had committed his fourth foul.   The Bradford coaching staff went to the scorer’s table and were told he had four fouls.

After the confusion, Crawford entered the game and buried a big three, got a floater to go and went one of two from the line to help Bradford take the lead at the end of the third quarter, 51-48.

Both teams exploded for over 20 points apiece and the Tornadoes had to find a way to come back from a six-point deficit with a minute and a half to go. Fort White’s ball control left when three starters were benched after reaching their fifth fouls and it led to Bradford getting a big win in the tournament title game.

Both teams will continue post-season play; Bradford will now host the Andrew Jackson Tigers at home in Starke on February 26. Fort White will have to travel to Jacksonville to face the Bolles Bulldogs. 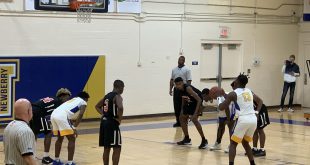 It was just that type of game for the Newberry High School boy’s basketball team.  …