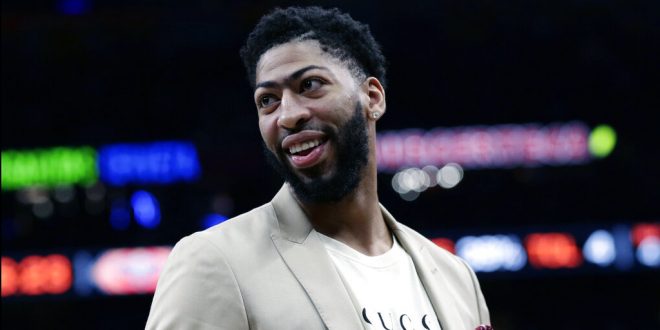 FILE - In this Feb. 2, 2019, file photo, New Orleans Pelicans forward Anthony Davis (23) smiles during the second half of an NBA basketball game against the San Antonio Spurs, in San Antonio. Only a few hours remain to determine if the Anthony Davis saga ends for this season or lingers into the summer. The NBA trade deadline is Thursday, Feb. 7, 2019, at 3 p.m. EST, and Davis is still seeking a trade from the New Orleans Pelicans.(AP Photo/Eric Gay, File)

While this past NBA All-Star weekend revolved around the players on the court in Charlotte, it provided the opportunity to address a lot of the off-the-court rumors surrounding Anthony Davis.

It’s no secret that the Pelicans’ forward wants out of New Orleans. That much is known after his trade request became public a couple of weeks ago. In Charlotte, Davis spoke on why he wants to switch teams.

“When you’re somewhere for seven years, of course, it’s tough, but I don’t know how long I’m going to play this game,” Davis said. “I want to make sure now that I have a chance to win. I want to win. So I felt like it was just time for me to move and forward and try to and take control of my career and try to win.”

Immediately, speculation was that the Lakers were front runners to land Davis. Rich Paul of Klutch Sports represents Davis. Coincidentally, or not, he also represents LeBron James, the main draw to anyone who would want to join the Lakers.

However, the two teams did not reach a deal before the trade deadline. That makes sense for New Orleans as Davis is still under contract through next season, and the Pelicans can presumably hold out for a better offer.

A team that has long been linked with Davis is the Boston Celtics, and they have the pieces to make a move in the summer. Jayson Tatum, Jaylen Brown, Marcus Smart, Marcus Morris, and a treasure chest of picks are available to the Pelicans. The Celtics just needed the Pelicans to hold off until the summer because they can’t have two Rose Rule players on the team through trade, and Kyrie Irving is already on the team.

Essentially, Boston would either have had to give up Irving in the trade, or wait until the summer when he’s a free agent, trade for Davis and then re-sign Irving.

What made this complicated was the fact that the Celtics did not make the list of preferred trade destinations for Davis.

That apparently changed at All-Star Weekend.

As expected, Anthony Davis’s “list” would change as soon as the trade deadline passed.@ByJayKing was first to report early this season that Kyrie spoke last summer with AD about the idea of teaming up in Boston. Kyrie and AD are friends, and Kyrie is AD’s main draw to Boston. https://t.co/EIBwpz0xDp

In fact, apparently, the supposed short-list doesn’t exist at all.

“All 29 other teams are on my list,” Davis said. “I don’t have a preferred destination. Like I said, I just want to win.”

The part that will make difficult for a non-contender to deal for Davis is the fact that he remains committed to testing free agency in 2020. Basically, a team needs to be comfortable with the fact of knowing that Davis is a one-year rental that they hope to convince in the one year he’s on the team.

“I’m going to be a free agent in 2020… and I’m going to test free agency, but no matter where I go, I just want to play basketball,” Davis said.