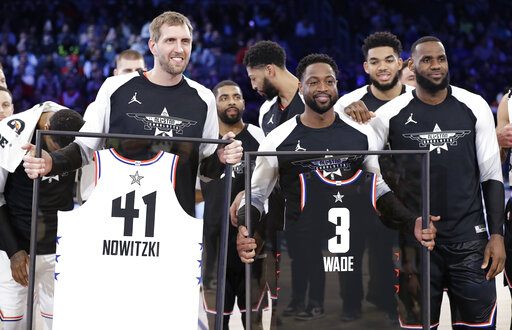 Team Giannis' Dirk Nowitzki, of the Dallas Mavericks and Team LeBron's Dwayne Wade, of the Miami Heat hold their jerseys during the second half of an NBA All-Star basketball game, Sunday, Feb. 17, 2019, in Charlotte, N.C. The Team LeBron won 178-164. (AP Photo/Chuck Burton)

Dwyane Wade and LeBron James had a chance to reunite on the court one last time at the NBA All-Star Game. The pair played four seasons together in Miami, reaching four consecutive NBA Finals and bringing two NBA titles to the Heat.

Wade was selected to this year’s NBA All-Star Game in what was called a “special roster addition” chosen by the captain. When this option for this type of pick became available, there really wasn’t a question that James would select Wade.

Wade said in an interview prior to the All-Star Weekend that he had one goal: toss a pass to James. He told the Miami Herald:

“My only goal All-Star Weekend is to try to throw LeBron one lob because that’s what everybody wants to see.”

Wade completed this goal early in the second half: a lob off the backboard let James find the net for a two-handed alley-oop.

Later in the game, Wade even got to slam a dunk of his own from James.

Team LeBron overcame a 20-point deficit in the second half to take down Team Giannis. With Team LeBron winning 178-164, here’s how Wade’s stats added up in his ten minutes of play:

End of an Era?

With Wade’s plans to retire after this 2018-2019 season, Sunday’s All-Star Game had to feel bittersweet. Wade and James shared this exchange on Twitter after the game:

Born and raised at the ballpark! Typically quiet- until it comes to sports. I'm a South Florida native with a passion for baseball nearly as strong as my faith. Grew up in garnet + gold, turned out sporting orange + blue. Likely to be found with a camera. And yes, I take food pictures.
@victoriarossman
Previous CC Sabathia to Retire After 2019 Season
Next Anthony Davis Opens Up on Trade Speculation/Free Agency During All-Star Weekend