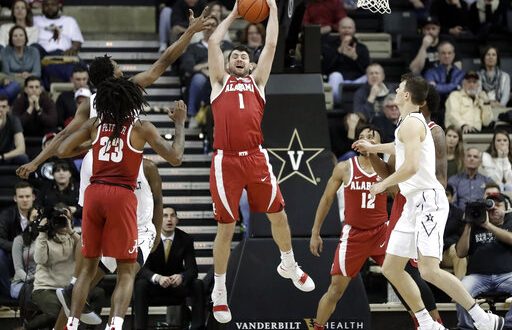 Alabama guard Riley Norris (1) pulls in a rebound in the second half of an NCAA college basketball game against Vanderbilt, Saturday, Feb. 9, 2019, in Nashville, Tenn. Alabama won 77-67. (AP Photo/Mark Humphrey)

The Alabama Crimson Tide travels to take on the Texas A&M Aggies, as both teams look to bounce back from losses. Texas A&M is coming into the game 3-9 in the SEC, while Alabama is coming in 6-6. Tip-off is set for 8 p.m. central time.

This will be the second meeting for these teams this season. Texas A&M won the first match-up 81-80 after a second half comeback at Coleman Coliseum. This win came off a buzzer beating three from Aggie guard TJ Starks. This win was the Aggies first win at Alabama as a member of the SEC. Both teams have faced off only 19 times, and 12 of those games have been decided by single digits.

Coach Avery Johnson and coach Billy Kennedy both know that their teams will have to step up and play for the whole 40 minutes to win this game.

Hitting the 70 point mark is something that has proved essential for Alabama to win. This season the Tide are 15-3 when scoring 70 points or more while being 0-7 when scoring under the mark. Two things will be necessary in finding this mark.

Freshman Guard Kira Lewis Jr. will need to be on as Alabama’s leading scorer. He averages 14.4 points a game and ranks 11th in the SEC. However, Lewis will not be the only key to getting points for the Tide. Lewis has scored double digits in the last five games for Alabama, yet they are only 2-5 for the last five games.

The bench will also be another key factor for Alabama. In their loss against Florida, the bench scored 20 points, but typically averages nearly 26 points. Getting Kira Lewis Jr. and the bench involved early will be the keys for the Tide hitting their 70 point mark.

Graduate student Christian Mekowulu went for two consecutive double- doubles in the Aggies wins against Missouri and Georgia. While Mekowulu went for 15 points in both of those games, he only had four points and four rebounds during their game at South Carolina.