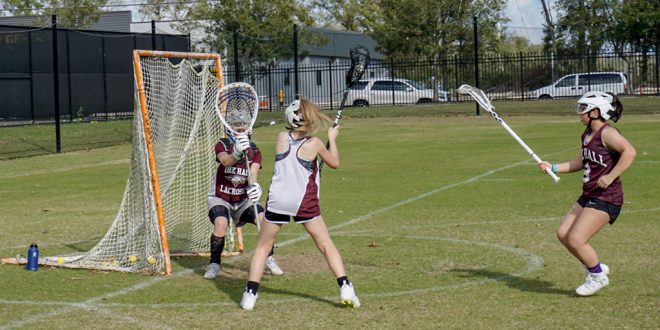 The Eagles get some shots in at practice, preparing for their first game of the season. (photo/Steven Walker)

The Oak Hall girls’ lacrosse team set their sights on their season opener at Episcopal School of Jacksonville coming up on Tuesday, February 19.

The Curse of the Final

The Eagles are coming off a bitter end to last season, as they lost for the fifth consecutive time in the regional finals to Hagerty. With 10 seniors and difference maker, Mason Yonge, the Eagles team was fully expected to win and advance to the state final four. Senior midfielder Kaylyn Koons said the team will try to use that loss as fuel for success this year.

“I don’t think we were expecting to lose to Hagerty. We were really expecting to win and go to state finals, so it was really hard to lose in the regional finals last year. I think the girls that were on the team will try to carry that defeat into this season.”

The Eagles have the coaching staff necessary for a major rebuilding year, as well, with former Gators lacrosse players, Head Coach Alexandra Puller and Annie Collins serving as an assistant. Puller played as a midfielder for the Gators from 2014-2017.

“I’ve been teaching the girls down here [all of it]. I have Annie Collins, [who] also played at Florida, as my assistant coach so between the two of us I think we have a wealth of knowledge that we learned from the University of Florida that we’re passing onto the girls.”

Both the girls and boys lacrosse teams at Oak Hall are entering rebuilding years, as both teams lost almost half their teams worth of seniors. The girls’ team arguably lost more talent, however, especially four-time Gainesville Sun Player of the Year Mason Yonge.

However, Coach Puller’s expectations are still high for her team, even with a relatively young team.

“I expect them to win districts this year [and] I expect them to beat Buchholz. It’s a rebuilding year, but we do have a lot of talent out there. We should be able to compete with the best of them.”

Puller has made several changes to the team even before the Eagles face their first opponent of the season. Seniors Kaylyn Koons and Stephanie Miller are both moving from defensive positions to midfield. The Eagles have also acquired transfers from high schools like Newberry and Santa Fe.

Coach Puller even mentioned Oak Hall girls basketball player Tyla Young coming out to practice to see if her defensive skills on the court could transfer to lacrosse.

When asked about the season and her new head coach, Koons said this.

“I think even though we graduated a lot of seniors, we’re still going to have a very talented team. Alex is doing a really great job with the team, especially considering how we’re so young.”

The team opens their season this afternoon in Jacksonville and hosts their first game against Creekside on Friday at 5 p.m.

I'm a third-year student at the University of Florida passionate about storytelling and sportswriting. My goal is to work in communications for a professional sports team after I graduate.
Previous Oak Hall boys lacrosse routs Chiles 16-3 in season opener
Next Alabama travels to take on Texas A&M in SEC Match-up