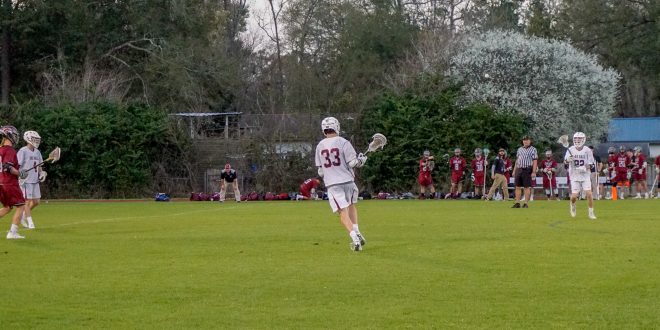 #33 Connor Clarke and #22 Michael Moreschi set up the offensive play above the restraining line. (Feb. 18)

Oak Hall boys lacrosse defeated Chiles from Tallahassee 16-3 Monday in what was a blowout from the very beginning.

The Eagles opened the game with seven unanswered goals in the first quarter. Efficient passing on the offensive end combined with suffocating defense was responsible for Oak Hall’s early success.

The University of North Carolina commit Ryan O’Leary led all players with seven total points (five goals and two assists). His play on the offensive side consistently gave his teammates open shots on goal.

One of those teammates finding early success was 18 Ben Moraski. Moraski scored six goals in the first quarter, including a point-blank behind-the-back goal from the crease, wowing the Oak Hall home crowd.

One of the keys to this win for Oak Hall was their play on the defensive side of the ball. Coach Montes for Oak Hall said that “We put the ball on the ground a lot, we doubled down pretty hard when they rolled to the interior. ”

The Eagles would double down, allowing very few shots from the interior. In fact, the only Chiles player who was able to score was #21 Trenton Fewox, who accounted for all three of the Timberwolves’ goals.

Ground balls were key for the Eagles in this one, with Kyle Cox leading all players with seven. Cox also led all players with five assists. Jack and Jacob Limon (#15 and #25 respectively) anchored the defense for Oak Hall, combining for nine ground balls and creating multiple turnovers.

Chiles struggled to move the ball all game long. Of the three goals they scored, only one was assisted. In the first half, they struggled to keep pace with a much more technically sound Oak Hall team.

@OakHallLacrosse more than doubling Chiles’s shots on goal in the first half. It’s 10-1 at the end of the second quarter. @ESPNGainesville pic.twitter.com/duDQgKvzhZ

Chiles ended the game with 16 shots on goal, which is considerably less than Oak Hall’s 43 shots on goal. It was not for a lack of trying though.

The Timberwolves also led the game in penalties, which could be characteristic of frustration stemming from last season’s sour end. Chiles’s season was cut short in the 2018 season due to the FHSAA ruling that they had an ineligible player on their team. The player in question was ineligible due to his GPA.

Chiles was forced to surrender their 2018 District 1 championship, and vacate many of their wins near the end of the season. With 13 seniors, the Timberwolves’s season was cut short, even though they had the 2018 regional playoffs in their sights.

Losing so many players, Chiles seemed shorthanded on the offensive and defensive sides as Oak Hall was able to overwhelm them.

Earlier this season, Coach Montes talked about how he wanted to play “mistake-free lacrosse”.

“I wouldn’t say we were exactly mistake free… We did what we needed to do but I thought we executed on a lot of levels.”

-Coach Montes on trying to be mistake-free vs. Chiles

Even in victory, Coach Montes has points of improvement for his team. This 2019 Oak Hall boys lacrosse team no doubt has championship aspirations, and championship teams improve even when they’re successful.

Coach Montes on improving the defensive side of the ball

If completely shutting down a district champion in the season opener is a starting point, then this Oak Hall team will look to surpass expectations in the 2019 season.

Oak Hall plays the Episcopal School of Jacksonville on Feb. 20