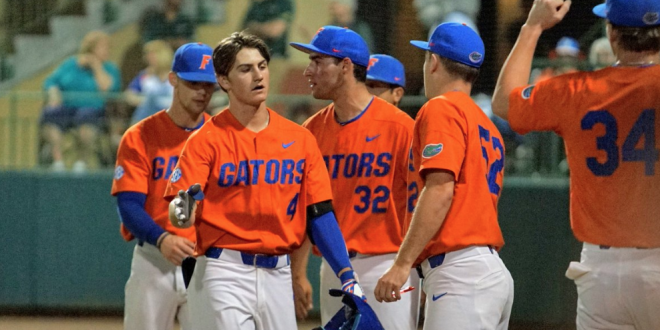 Gator Baseball Recap: Florida’s first loss of 2019 comes at the hands of USF

The Florida Gators baseball team’s unbeaten run to start the 2019 campaign is over.

No. 3 Florida exerted their dominance over a three-game series against Long Beach State this weekend, but Tuesday night’s game was a struggle almost from the get-go.

A mixed performance from the bullpen aside, the big hit alluded Florida’s hitters all night. Kevin O’Sullivan’s team stranded 12 runners on base and only mustered two hits. It proved a frustrating short trip, yet Florida will have a quick turnaround when they face UNF back in Gainesville on Wednesday.

In the first inning, the Bulls jumped on starter McMullen immediately. Their half of the inning opened with McMullen having to deal with a bases-loaded jam.

He would end up allowing two runs via a fielder’s choice and an RBI single from Bulls’ first baseman Joe Genord in that frame. McMullen’s game would end in the third inning.

After getting Kyle Phillips (3-4, 2 RBI, BB, SB) to ground out, the sophomore served up a towering home run to Genord. O’Sullivan would turn to sophomore Justin Alintoff after McMullen walked the next hitter.

Alintoff would provide the Gators with 2.2 solid innings of relief. He maneuvered out of a tough jam in all three innings he appeared in. Despite issuing three free passes, he was able to keep USF from cracking the game open.

Ruth was brilliant in his first appearance as a Gator over the weekend, and he was able to dazzle again in the 6th inning of Tuesday’s game.

But in the seventh inning, the Bulls tagged him for three runs. DH Chris Chatfield opened the inning with a solo home run. Like McMullen before him, Ruth appeared to get rattled after the moonshot.

He proceeded by allowing a hit and walking two batters. A two-run double from Phillips then gave him his third hit of the night and sucked the life out of the Gators.

Gators pitchers issued seven free passes on the night. For the second time in four games this season, O’Sullivan yanked his starter before the fourth inning. The Gators are scheduled to play four more games this week, so the depth of their starters will be something to watch going forward.

The Gators’ bats didn’t produce a stellar performance in the weekend’s series finale, but they were able to manufacture key runs with loud contact.

On Tuesday they would come up empty when it mattered most. The Gators’ lineup collected six walks and were hit twice but could do nothing with those runners. Their only run came on a solo shot from freshman Jud Fabian.

In the third inning second baseman Cory Acton flew out to deep center field to leave the bases loaded. In the fourth, shortstop Brady McConnell would strike out with runners on second and third to end that threat.

The frame before the Bulls jumped on Ruth, the Gators squandered the first-and-third opportunity by striking out three consecutive times at the hands of left-hander Logan Lyle.

Following this weekend’s injury to Blake Reese, a lot of young players will now have an even greater opportunity to produce and earn playing time. Florida’s lineup was unable to muster a hit against starter Baron Stuart until the fifth inning. They struck out 13 times against Bulls’ pitchers.

O’Sullivan surely will not be satisfied with his hitters’ approaches at the plate on Tuesday. Once again, his team will get the chance to put things right on Wednesday back in front of a home crowd. First pitch is set for 6 p.m. ET.

The Gators won’t be able to earn their first road win of the season until they travel to Jacksonville on Feb. 26.