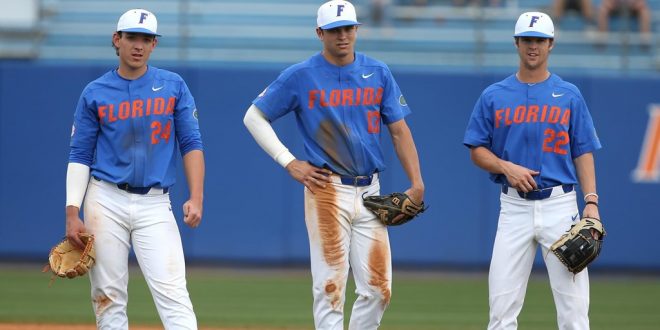 Sophomore Hunter McMullen got the start on the mound for Florida and he ran into trouble in the first inning.  Joe Genord drove in a run on a fielder’s choice and former Gator Austin Bodrato singled in a run to give the Bulls a 2-0 lead.  Genord hit a solo homer to make it 3-9 USF in the third inning.   Meanwhile, Florida had many chances to score but left a flurry of runners on base and the Gators didn’t score until freshman Jud Fabian hit a solo homer in the sixth inning.

The Bulls broke open the game in the seventh inning, scoring three runs.  Designated hitter Chris Chatfield hit a solo homer and Kyle Phillips hit a two run double to complete the USF scoring.  In all, Florida managed only two hits in the game and left 12 men on base.  McMullen took the loss for Florida while reliever Richie Cruz picked up the win for USF, now 3-1 on the year.

The Gators will look to overcome this loss with a game at home Wednesday against North Florida.

The Ospreys hit the road for the first time this season to face their second straight SEC opponent.  UNF clinched a series win over the Missouri Tigers in their season opener this past weekend.

The Ospreys have have a talent on the mound in junior transfer Max McKinley. McKinley earned ASUN Pitcher of the Week honors for his performance in UNF’s 4-2 victory.

McKinley recorded eight strikeouts in seven innings against Missouri.  The Ospreys have been strong offensively sitting at a .313 clip heading into their match up against the Gators.

In their last meeting with the Ospreys in 2018, the Gators came up with two victories over UNF. The Gators traveled to Jacksonville to earn a 4-0 victory and a swept the series with an 8-3 win at home.

The Gators are 13-6 all-time against the Ospreys, with the first meeting between the two teams occurring in 2006.