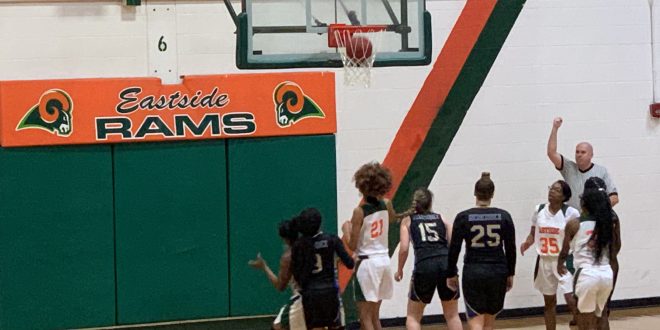 Playoff Match: The Lady Rams face off versus the Lady Falcons in the FHSAA regional semifinal.

The district champions weren’t able to stop the offensive power of the Lady Falcons and the Rams fell into an early hole they could not climb out of, as they were outscored 17-1 in the second period of play.

“It’s one of those games that I guess eventually we had to have and we had it tonight,” said Rams coach Lonnika Thompson.

According to Thompson, the Lady Rams’ loss was attributed to their lack of motivation and determination.

“We prepared enough to where I know we didn’t have to change anything about our offense or defense so I know we could’ve beat this team,” Thompson said. “They won because they showed that they wanted to win.”

The first quarter saw both teams struggle to surpass the other when it ended tied at 11-11.  But then the second quarter happened.  The Rams trailed at halftime 28-12.

“We can complain about the refs, but at the end of the day, we missed a lot of free throws,” Thompson said.

The third quarter only made the game more difficult for the Lady Rams. Although Eastside was able to score eight points, the point difference grew and the quarter ended with Eastside down 42-20.  This quarter also saw point-guard, Shamya Coleman, get escorted off the court due to a serious knee injury.  According to Thompson, Coleman has had problems with her knee all season.

“She said she heard something pop,” Thompson said.

The Lady Rams scored more points than the Lady Falcons in the last quarter but that wasn’t enough to change the tide of the game.

“I basically told them there’s no need to cry because you brought this on yourself,” Thompson said. “We didn’t do the things that we know that we can do to win this ball game. You can have your week off and then you need to come back and just get in the gym.”

@Gio_Delfa
Previous Gator Baseball Falls To USF; Host UNF Next
Next Gator Swimming and Diving: Both sides enter top half of SEC standings heading into Day 2