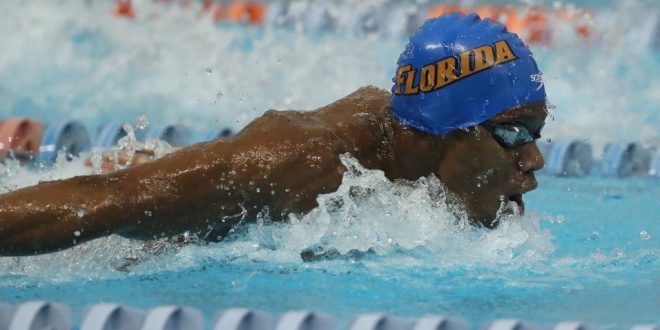 Florida Swimming and Diving in the SEC Championships

Day two of the SEC Championships wrapped up in Athens, GA., with both Florida women’s and men’s swimming and diving teams finishing in top-five standings at the Gabrielsen Natatorium.

This competition is nothing new for the powerhouse team that is the Florida Gators. They’ve managed to win the SEC title for a total of 37 times in school history. Furthermore, they’ve won the last six championships in a row, dating back to 2013.

On Day 2, Florida finished with a score of 353.5, securing a second place spot 24.5 points behind leader Missouri.

Five first place finishes improved their advantage over Texas A&M and Alabama who are sitting in third and fourth place, respectively.

Freshman Kieran Smith managed to place first in two situations but for the same event. Smith set a personal record in the 200 IM with a time of 1:42.94 in the preliminary round. He almost tied that same mark in the final round but missed his mark by .18 seconds. Still, he managed to pick up the first individual SEC championship for the Gators.

Meanwhile, the women’s team finished in third place behind Texas A&M and Tennessee with 388.5 points. Besides the high scoring outing, the real takeaway from Day 2 for the women’s team was freshman Vanessa Pearl making Florida history. She set the fastest time ever in the 200 IM with a 1:53.98 event but still finished in fourth place.

Pearl was one of the top recruits coming into the 2019 season. She was ranked 13th in the nation and fourth overall in the state of Texas.

Leah Braswell also had herself a fantastic start to Day 2 as she ended in second place in the 500 Free A Final event with a personal-best time of 4:36.18. Braswell accomplished a record fourth-best time in school history with that mark.

The Gators will look to keep grinding out their record setting SEC championship run and seek out their first title since 2009.

Recent grad from the University of Florida. Editing all articles on here while helping out the newbies. Love all things basketball.
@@MarcoJMartinez_
Previous No. 3 Gators Win against JU Dolphins
Next Duke vs. UNC: Williamson injured, Tar Heels beat Duke