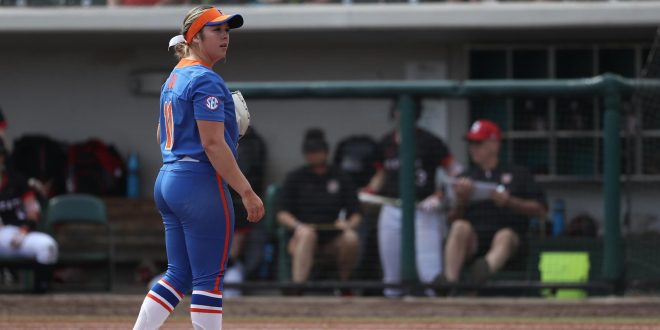 No. 3 Gators Win against JU Dolphins

The No. 3 Gators softball team took the phrase “pitching a shutout” literally on Wednesday evening as sophomore pitcher Natalie Lugo struck out a career high 13 batters to lead the Florida Gators (12-0) to a 5-0 win over the Jacksonville Dolphins (4-5).

With multiple rain delays at Debbie and Fred Pruitt Softball Complex, the loss was a slow burn for the Dolphins. The first delay happened just moments after Amanda Lorenz had a huge hit over the right-field wall. This home run would give the Gators a 1-0 lead.

The delay lasted around 10 minutes and required only small tarps over the pitching circle and batter’s box.

The Gators would go up 3-0 at the top of the second, with Jordan Matthews hitting a two-RBI single that took Alex Voss and Sophia Reynoso home.

This opened the flood gates as the Gators would score their final two runs in the same inning, with Lorenz scoring a second time and Hannah Adams drawing a walk with the bases loaded. After another hour-long rain delay in the top of the fifth, Lugo closed out the final three innings with six strikeouts, leading to a 5-0 Gators win.

Players of The Game:

This victory is Florida’s fourth shutout of the season and puts them at 22-0 against the Dolphins all-time. The Gators will look to continue their undefeated season when they host Illinois State on Friday for the start of the Bubly Invitational.