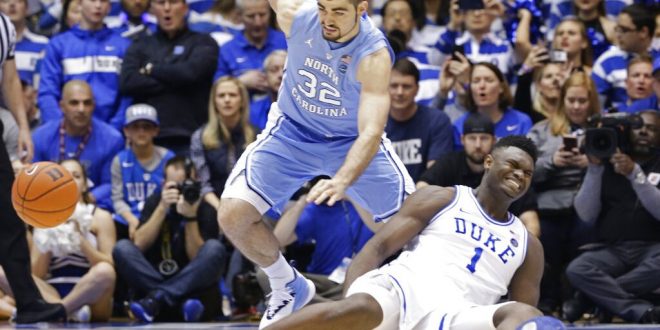 Duke's Zion Williamson (1) falls to the floor with an injury while chasing the ball with North Carolina's Luke Maye (32) during the first half of an NCAA college basketball game in Durham, N.C., Wednesday, Feb. 20, 2019. (AP Photo/Gerry Broome)

The rivalry basketball matchup between the Duke Blue Devils and the UNC Tar Heels this year came with some rather steep ticket prices. The cheapest ticket for the game? Nearly $3000.

The battle between the two elite basketball programs is always an exciting one, however, ticket prices are typically not as astronomical. What made this year different was one phenom of a freshman- Duke’s own Zion Williamson.

Fans who paid the outrageous ticket prices were surely counting on seeing Zion play for more than one minute.

Unfortunately for Williamson, them, and their wallets, that wouldn’t happen.

Around 30 seconds into the game, Duke’s superstar would be forced out of the game with an injury. Williamson slipped awkwardly and fell to the floor and immediately grabbed his knee. In the opening play of the game, Williamson was just dribbling around the free throw line and planted hard, but the Nike shoe on his left foot would not support him as the sole ripped from the shoe along the outside edge and his foot came straight through the gaping hole in his shoe.

Moments later Zion walked off the court on his own, but limping slightly. He limped back to the Duke locker room with no shoes on. Fellow Duke freshman Tre Jones said, “I just thought he’d twisted his ankle or his knee. But when he took his shoes off, I thought maybe something else was going on.”

Zion wouldn’t return to play in the rivalry game.

Tar Heel center Luke Maye led the charge against the Zion-less Blue Devils with 30 points in addition to 15 rebounds. No. 8 ranked UNC would go on to win at No. 1 Duke 88-72.

DOWN GO THE BLUE DEVILS!

No. 8 UNC hands No. 1 Duke a big loss at home in a game that Zion left with a knee injury. pic.twitter.com/0fgx6iA1pY

After the game, Duke Head Coach Mike Krzyzewski named Zion’s injury as a “mild knee sprain” but couldn’t offer any specifics regarding the injured freshman. However, he did mention that his knee is stable and he will undergo further testing with results expected on Thursday.

“We’re very concerned about Zion,” said Coach K. “It’s a mild knee sprain. We will know about length of time tomorrow. It’s stable. Obviously it has an impact. You lose the NPOY on the 1st play.”

It obviously did have an impact because it was only the 3rd game the powerhouse of a basketball team had lost all season. After the Zion injury, when North Carolina took possession, they scored and took the first lead of the game, which they would not relinquish. It’s the Tar Heels first win at Duke since 2016.

Duke freshman forward Cam Reddish confirmed that losing Zion was really difficult for the Blue Devils. “We miss him as a player, but it’s not just that,” Reddish said. “He is also the source of our energy. So, without him on the floor, that energy is missing. We have to be back in the gym tomorrow, figuring out how to find that energy while he is gone. However long that is going to be.”

Duke is back in action on Saturday and taking on No. 18 Syracuse. Zion’s return to the Blue Devils is still unknown.