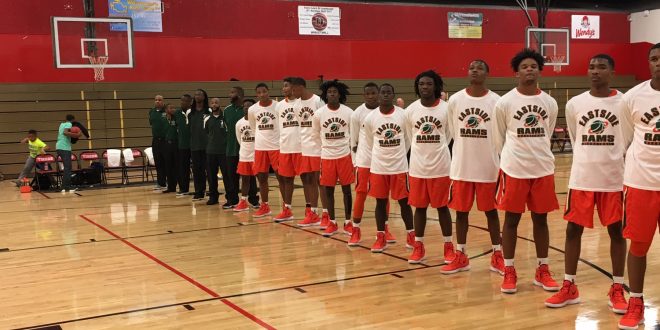 The high school basketball playoffs are into the regional round and multiple area teams are in action tonight.

Gainesville High School, Eastside and Sante Fe all will be representing Alachua County this evening. A win would put these teams into the regional semifinals.

Let’s take a look at each matchup and what to watch for going into tonight. All games tip off at 7 pm.

The Hurricanes will face a familiar opponent in the quarterfinal round as they head to St. Augustine. In the 2018 playoffs, GHS hosted the Yellow Jackets in Gainesville and dismantled St. Augustine by 38 points.

However, this years GHS team looks drastically different from that of a season ago. The Hurricanes return only one starter from 2018.

Despite the 12 loses, Gainesville has kept it close in the majority of those defeats. The Hurricanes have lost three of their last four but have kept each game within 10 points.

Meanwhile, St. Augustine is on an eight-game win streak. In those eight wins, five of them have been by at least double digits. The Yellow Jackets are 7-2 at home while the Hurricanes are 4-4 on the road.

Eastside will look to continue its dominance in the 2018-2019 season against visiting Clay tonight. The Rams are riding a 12-game win streak and average just under 59 points per game and allow only 42points. Korin Bradley leads the team in scoring with 14.8 points per game.

The Rams only two losses this season have been on the road and both of them have been to top-ranked teams in the state. Eastside lost to 7A Doral Academy early in the season and at 1A Hawthorne by two points.

A win over Clay would more than likely mean a matchup with Palatka. Palatka has knocked the Rams out of the 6A playoffs each of the last two seasons.

The winner of this game will take on the winner of Clay-Eastside. Both schools enter the playoffs coming off strong regular seasons.

Sante Fe dropped its last contest, in the district finals against Eastside, but had won six straight prior. In that win streak, one of the Raiders victories was over Palatka. Sante Fe bested the Panthers 68-67 in Palatka only two weeks ago.

The Panthers will be tough to beat twice though. Palatka has been to the state final four the past two seasons and is looking to get there a third time.