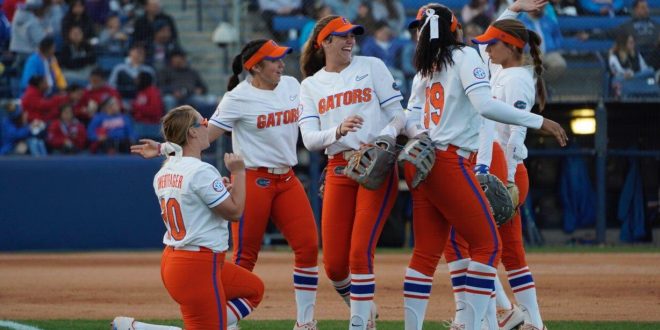 The softball team has made its trip out west for one more tournament before they gain play against conference opponents.

This tournament features three teams ranked inside the top 25; UCLA at No. 2, Washington at No. 5 and Oregon at No. 20.

The Gators did face-off against the Bruins yesterday before the tournament was actually underway. Florida lost the game 7-1, picking it their first loss of the season.

Gators muster eight hits but fall to No. 2 UCLA on first day in Fullerton.

Kelly Barnhill got the the nod for the Gators yesterday and struggled in just two innings of work. She gave up for runs on six hits to go along with two walks while also picking up her first loss.

Florida’s offense was almost nonexistent in the loss to the Bruins. Outside of a three-hit day for Kendyl Lindaman and the lone RBI for Hannah Adams, the bats were quiet. This was largely due to Bruins’ Holly Azevedo who fanned eight batters on six hits in her five innings of work.

Having already played the best team in this tournament once, the Gators should be ready for the rest of the weekend.

They’re back in action today against New Mexico and later against Oregon. Friday is the day to look out for Gator fans as they have two matchups against opponents in the top five; they play UCLA and Washington.

Should the Gators find success in this tournament Kelly Barnhill will need to play better throughout. That was were first game being exposed to championship contender hitting so she should be able to shake it off.

Florida’s bats will need to be more efficient as they left eight batters on base in the loss to UCLA yesterday.

With the conclusion of this tournament, the Gators will travel back home for their first series on the season against SEC opponents Tennessee.

Although the Gators football team is on a bye, it’s a loaded weekend for Gator …