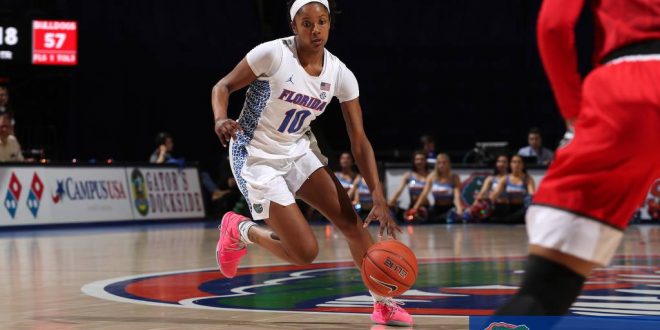 Who is Danielle Rainey?  She is a Redshirt sophomore from Round Rock, Texas. Rainey attended Vista Ridge high school in Texas where as a senior she averaged 13.9 points a game. Rainey’s high school performance was impressive, leading to her high recruitment going into college.

She was ranked as the 13th player in Texas and ESPN ranked her 22 at her position.

Rainey began her college career at TCU as a three-star prospect. However, her college career did not begin the way she had always envisioned. She only played 11 games at TCU averaging 1.7 points and 5 minutes per game; she came off the bench in all these games. After this kind of production, Danielle decided not to suit up for her sophomore year at TCU and was granted a red-shirt instead. 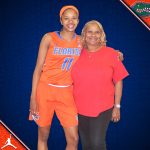 Fast-forward to 2018 and Danielle found a new home. She made her way south-east to Gainesville, Florida and became a Gator. When she arrived at the Swamp, her college-level experience was slim after only seeing the court 11 times at TCU. Not to mention, TCU was in the Big 12 Conference, and switching into the SEC conference would bring her into a different type of game and competition.

Rainey came in as an addition to new head coach, Cam Newbauer, who was excited to add Rainey to the already talented Florida Gator roster during his first year as head coach. However, Rainey would have to sit out until the 2018-2019 season. 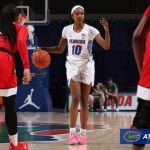 The first time Rainey stepped on the court as a Gator came against Ohio State on December 16, 2018. Ever since then, Rainey has made a positive impact on the Gator lineup and continues to provide points for the Gators going into the SEC Tournament.

She is averaging 8.4 points per game for the Gators, and when asked where this effectiveness comes from she said:

“I leave it all on the floor when I go out there and make it as fun as I can.”

Rainey’s highest scoring game was against the Kentucky Wildcats nearly one month ago where she led the Gators with 20 points.

The Gators will enter the SEC tournament as the 12th seed, facing off against Ole Miss. In their prior matchup, where the Ole Miss Rebels defeated The Gators, Danielle Rainey was one of three players in double-digits that game scoring 15 points.

When Rainey was asked about nerves going into her first SEC tournament, she had a totally different mindset,

“I’m very excited, every team goes into this tournament putting their jersey on just like we do so, I mean, whoever plays better that night is who will win.”

Previous SEC Tournament: Gators women’s hoops to face off against Ole Miss
Next Funda Nakkasoglu: A contributor on and off the court for the Gators