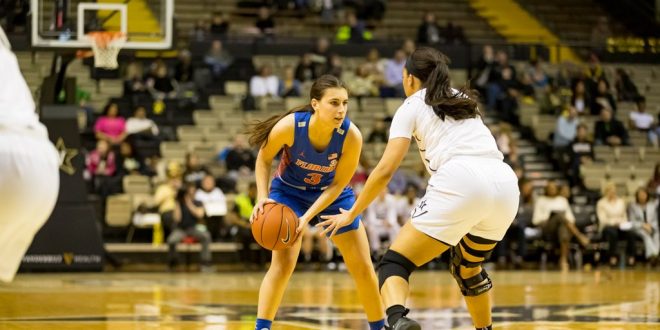 Florida women’s basketball secured their first road victory of the season with a 78-66 victory over Vanderbilt on Sunday. UF (7-22) did not have a great year in the win column, but the team can still turn things around.

The Gators begin the SEC Tournament on Wednesday as they will face off against Ole Miss. Redshirt senior Funda Nakkasoglu, who notched her 2,000th point this past weekend, is in the mindset that it is a brand new season for her and her teammates.

“It just builds momentum and confidence,” Nakkasoglu said. “We saw that we can put it in and focus for 40 minutes, which is what we have been trying to practice and do for so long now. Just knowing that, we can bring that into our next game. It’s 0-0 now, it’s March.”

Previous matchup versus the Rebels

Head coach Cameron Newbauer’s group is already familiar with Ole Miss as the two sides clashed back in January.

Although the Gators fell 76-66, the team kept up with the Rebels for a majority of the game. UF trailed just 34-33 going into halftime behind efficient shooting from the floor and their aggressive on the court. Florida connected on 13 of their 25 shot attempts in the first two quarters and made it to the line eight times as well.

Despite UF’s stellar shooting from the field out of the gates, the team could not duplicate that production in the following 20 minutes. Florida connected on four more three-pointers than they did in the first half, but their field goal percentage dipped significantly.

As a group, they made just 31 percent of their attempts and knocked down only 53 percent of their free throws. The Gators could not recover after being outscored by eight points in the third quarter and suffered, to that point, their fourth SEC loss of the season.

Along with staying consistent for all 40 minutes, Florida is going to have to focus on Crystal Allen in order to advance to the next round.

The Gators did a good job of keeping Allen in check when they took on Ole Miss back on Jan. 20. The redshirt senior was held to 14 points on just 2 of 8 shooting in her previous matchup against Florida. On the season, however, Allen is averaging 18.3 points per game and is shooting nearly 34 percent from behind the arc.

Florida is also hoping to have another solid game from both Nakkasoglu and Delicia Washington. Against the Commodores, the pair of teammates combined for 43 points on 15 of 24 shooting from the field.

UF could expect production from redshirt sophomore Danielle Rainey, who is averaging 8.4 points per game. Rainey has put up double-digit points in seven conference contests so far this season.

Tipoff for Florida’s game against Ole Miss is set for 11 a.m. on Wednesday. ESPN 98.1 FM/850 AM WRUF will have radio coverage of this pivotal matchup.

If the Gators end up winning against the Rebels, then they will face off against Missouri on Thursday. Florida beat the Tigers 58-56 at home on Jan. 13.

Quotes courtesy of the UAA.

Previous Preview: Gators Baseball hosts FGCU for Pair of Midweek Games
Next Transfer Danielle Rainey’s Impact with the Gators on her First Journey to the SEC Tournament