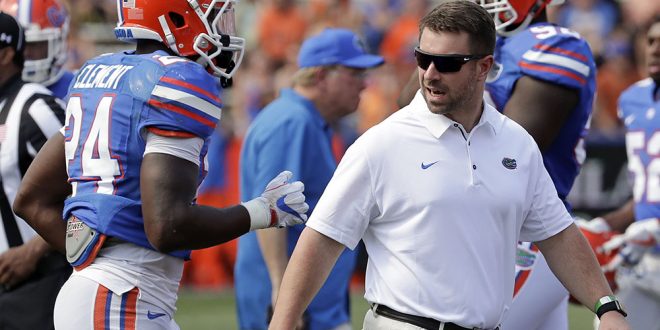 When head coach Dan Mullen joined the Gator football program in 2017, he brought along an important asset to The Swamp.

Nick Savage joined the football program staff in December 2017 and was named Director of Football Strength and Conditioning. Savage worked previously with Mullen at Mississippi State where he conditioned and built strength for the Bulldogs during the 2016 and 2017 seasons.

Many Gators on the team have credited Savage for making them mentally and physically stronger.

There’s also a mindset that the Gators are striving for this upcoming season.

“He is one of the most important people on the staff,” Mullen said. “It’s such a critical role, almost a second head coach. He understands what we need in the program and he drives himself to get better.”

The players have looked noticeably different since Savage joined the program, whether it’s trimming down or packing on muscle. In two months since starting in the program, the guys on the team averaged a 3.5 percent loss in body fat because of Savage.

With spring training in full force, Savage has been able to push the guys harder in his second season with the team.

Savage knows his job at Florida is important because it’s not only these student-athletes careers but the rest of their lives.

The Florida Gators and Savage will make their first 2019 debut in The Swamp on Saturday, April 13 for their annual spring Orange & Blue Game.

However, the 2019 season kicks off Aug. 24 in Orlando, FL against the University of Miami Hurricanes, for the 2019 Camping World Kickoff.

The first home game is Sept. 7 versus Tennesse-Martin Skyhawks.

I am a fifth-year journalism major, specializing in sports and media. My favorite sport to watch and cover are college and NFL football. When I'm not doing that, I enjoy hanging out with my cat, going to concerts and traveling.
@sportsabrina
Previous Florida Baseball Finds New Spark in Jacob Young
Next The Cleveland Browns: From the Laughing Stock of the NFL to One of its Most-Feared Teams