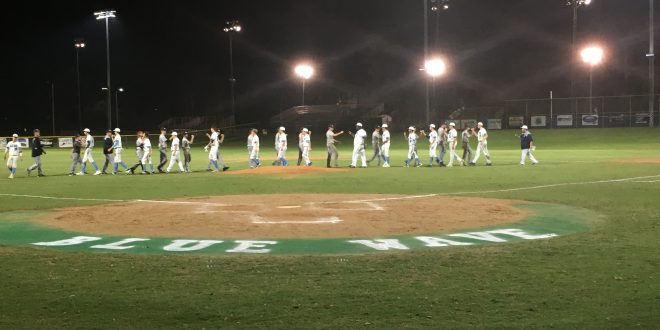 The PK Yonge Blue Wave baseball team faced the Fort White Indians in a Thursday night game. The Indians came out on the top defeating the Blue Wave with a score of 4-0. Both teams struggled in the first few innings to get on the scoreboard.

We’re here at @pkyongedrs where the @BaseballPKY is playing against Fort White! We’re at the top of the 3rd inning and both teams are still trying to get on the board. @DastgerdiSara @ESPNGainesville pic.twitter.com/nON44mbQDm

Fort White was finally able to get on the scoreboard in the top of the third, stringing together a double and two singles to push across a run.  The Indians continued scoring in the top of the sixth inning, where they hit another double with runners on base, making the score 3-0. The Blue Wave center fielder then dropped the ball, allowing a third Fort White player on second base to score to make it 4-0.

Here is a great catch by Blue Wave’s shortstop in the top of the sixth! Fort white leads 4-0 going into the bottom of the sixth. @CamilaMaffuz @ESPNGainesville pic.twitter.com/Tv0ntgSFVg

PK Yonge coach Robbie Brunson explains the next steps the team needs to take in improving their game.

The PK Yonge baseball team has been struggling to break their three-game losing streak. They now have a 1-3 overall record. On the other hand, Fort White has won two straight and their overall record stands at  3-3. Both teams will be facing each other again Friday night, where The Blue Wave will try to break their streak while The Indians will try to maintain theirs.

Camila is a senior at the University of Florida, who served as a beat writer for the women's basketball team from 2019 until the 2021 season. She was also a beat writer for the Gators football team during the 2020 season. Camila is also WUFT's news director as well as a sports reporter/anchor.
@CamilaMaffuz
Previous Bradford Softball Blanked By Santa Fe
Next The Players Championship set to continue with the second round on Friday