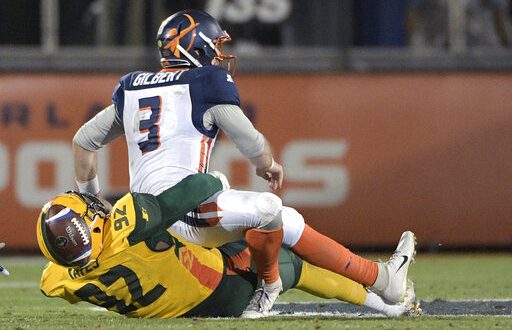 ORLANDO–They questioned if it would ever happen. It seemed everything went right every week. Come week six it happened and things just didn’t fall into place. The Orlando Apollos took their first loss of the season. The 22-17 loss against the Arizona Hotshots gives them a record of 5-1.

The Apollos led in most categories: passing yards, total yards, and even had fewer penalties. But the Apollos also turned over on downs more and had less time of possessions. As a result, Arizona was the team that left with the W and the Apollos undefeated season is over.

“We didn’t play well enough, coach well enough,” said Apollos Head Coach, Steve Spurrier, “I made a couple of bad calls on 3rd & 1, 4th &1 but we still had a fighting chance at it and they got a nice interference call late in the game. We almost got one didn’t get it but that’s how it works out sometimes.”

To add insult to injury the Apollos also got false start penalty on offense–while QB Garrett Gilbert was attempting to spike the ball of all things–that resulted in time being rolled off the clock and ending the game. Fans met their dissatisfaction with some harsh language.

Some success was unsustainable. For example, going into the game the Apollos had never turned over the ball in the first five games. It was likely going to happen eventually and unfortunately for the Apollos, it happened in some bad spots. Garret Gilbert threw his first interception of the year late in the first half down 14-6.

Steve Spurrier swears that coming into tonight the Apollos had overcome having to start a lot of drives on their own 2-yard line.

“We’ve somehow come off the 2-yard line a whole bunch of games,” said Steve Spurrier in the postgame press conference, “maybe it just caught up with us.”

Spurrier jokingly asked if stats for success when starting at the 2-yard line were kept track of.

Orlando also failed four 2-point conversions. Even making just one more could’ve given them a chance at a game-tying field goal instead of needing the touchdown.

Overall, it was still a competitive game. Both teams held a lead at least twice and the finished with less than a touchdown of a difference. The Apollos had a perfect start to the season and it seemed inevitable that mistakes would eventually be made and the loss showed for it. This doesn’t mean the team is going to collapse and finish 5-5, but it also doesn’t mean this is their one bad game and they’ll finish 9-1 and steamroll to the championship.

To keep moving forward, Garrett Gilbert and the Apollos will need to make adjustments to continue the inaugural success.

The Apollos will play the Atlanta Legends on the road Saturday, March 23 at 2 p.m.

Harrison is a sports coordinator at ESPN 98.1 FM/850 AM WRUF. He served as a beat writer for Florida Gators football for the 2019 and 2020 seasons. He also contributes to WRUF's Gainesville Sports Center segments and makes appearances on the Clash on Harp on Sports. Harrison has been a content writer for WRUF since January 2019 as well.
@HarrisonSmaj
Previous Gator Baseball Splits Saturday Doubleheader with Mississippi State, Avoids Sweep
Next Lindaman Grand Slam Silences LSU